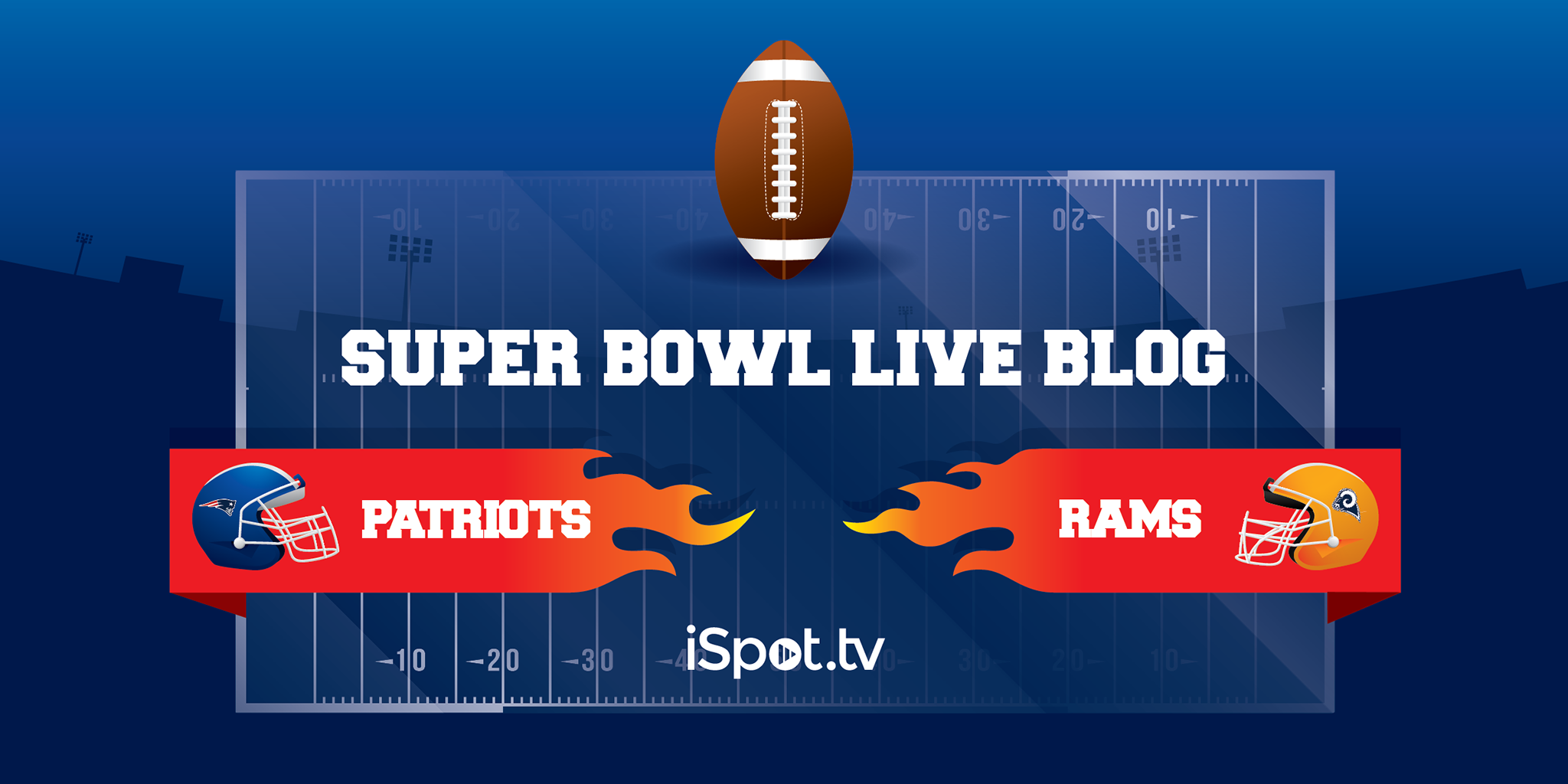 The live blog was compiled watching the game on CBS from the Seattle, Washington feed provided by Comcast. All information on ads and pods is preliminary. Please visit the iSpot Super Bowl 2019 Ad Center for the most up-to-date analytics.

That’s a wrap for the Super Bowl 53 live blog but there is a lot more analysis to come. Additional numbers will be published on Twitter later tonight and you can visit the iSpot Super Bowl 2019 Ad Center for the most up-to-date information as it is processed. The Ad Age Super Bowl report will also be coming.

From all of us at iSpot, thank you for reading and have a great night!

The Ad Report will be coming in the morning, but for those who want a taste we have some preliminary numbers to share.

These numbers are preliminary so be prepared to see updates tomorrow. Social activity will continue to occur through the night impacting standings.

Stats Through the First Half of Super Bowl 53

That’s going to be a wrap for tracking ad pods in the live blog. We’re not done yet as we will be sharing some stats from the first half of the game shortly and we’re working on generating more for the second half. There were three ad pods in quick succession.

End of Game (but a lot more blog to come)

The Patriots scored another field goal leaving the Rams with about 1:12 to make two scores. With 8 seconds left a missed field goal brought Super Bowl LIII to an end. Tom Brady wins his 6th Super Bowl ring. We have a lot more to go about ads in our live blog so don’t touch that URL!

The Washington Post ad is going to be a hot topic. We’ve got some first half stats we can share coming soon.

We want a beer after seeing that…ad, ya, the ad.

A team got into the red zone! Amazon Alexa looks like they’ve done it again after a very successful campaign for Super Bowl 52.

Will be interesting to see the social reaction to the Burger King ad. The Clydesdale horses make their annual Super Bowl appears in the 4th quarter.

Some misty eyes brought to you by Microsoft. I think we can all agree, the black hole slot of death between the center console and the seat of a car is the worst.

With a little more than 17 minutes of game time left – we have a tie game and no touchdowns. We like that cup in the Skechers ad, we could definitely sink that on a drive.

Please, if we ever meet, give us more personal space than Luke Wilson – even if you have just brushed fresh breath.

We are guessing the DEVOUR Foods ad is getting a lot of conversation.

Links are updated through the 14th ad pod now in the live blog. Netflix has a visually stunning ad for Our Planet, and once again we have the robot race with the Michelob Ultra ad.

Not much game play with a Patriots player injured on the field. Kia played it more safe than previous Super Bowls with their Telluride ad.

The Rams will get a chance to put points on the board with the start of the second half. The Supra is back.

The links through Ad Pod 9 have been updated. Maroon 5 is over and we are ready to see the second half!

Patriots: 3
Rams: 0
Last Play: Patriots take a knee – end of the first half

It’s half time and that means Maroon 5, Travis Scott and Big Boi and special guest star Squidward will be taking center field. Adam Levine, the front man of Maroon 5, has appeared in 46 different spots. The 15th ad pod for Super Bowl LIII featured house ads for CBS, regional and local ads and an amazing NFL ad that will be sure to create a lot of buzz. The story in the game? Defense. Defense. Defense.

We will be going back to update some of the previous links. Our editorial team has been ingesting and validating the spots that have played so far. Enjoy the halftime show!

Two minutes left in the first half and no touchdowns. Pretty amazing score and a great game so far. The TurboTax Live – Robochild ad also played during the pregame.

The mint mobile ad got a – strong reaction.

The first ad to tug at our heart strings with the great story of Antoinette Harris. There was a lot of laughs for the Planters ads featuring the iconic Mr. Peanut.

Tacos? Tacos? Bring me tacos! Ludacris has appeared in 17 different spots, including the Mercedes Benz ad that just aired.

I think a certain Fortune 25 company based in Seattle is getting a lot of advertising by proxy with smart speakers getting lampooned. Play me some Funky Town!

Every year Bud Light knows how to get the laughs and create memorable ads.

The Audi ad got a lot of laughs here at iSpot. Robots are definitely a theme also with advertisers this year.

Did you expect this defense brawl from these two teams? Still no score.

Sarah Michelle Gellar wants you to have killer skin, along with Olay.

Lots of laughs on the Hyundai Shopper Service ad. They certainly nailed the pain points of life!

The game has begun!

Gladys Knight shows see still has it, with the 4-time Grammy winner belting out the National Anthem. She is best known for her hits Best Thing That Ever Happened To Me, Neither One Of Us, and Midnight Train to Georgia.

We’re 30 minutes away from the start of Super Bowl LIII and the Pregame Kickoff Show has started. Pregame Ad Pod 1:

Featured pregame artist Tim McGraw has appeared in 20 different spots for brands such as American Express, Target, Pennzoil, and Spotify.

The journey to Super Bowl LIII is complete. Sixty-four expected brands, the New England Patriots, the L.A. Rams and of course iSpot. iSpot will be live-blogging before, during, and after the big game. Follow us today to get real-time advertiser insight and information, as well as facts and figures on the brands, celebrities, and talent featured today.

For the live blog we will be watching the game on CBS from the Seattle, Washington feed provided by Comcast.