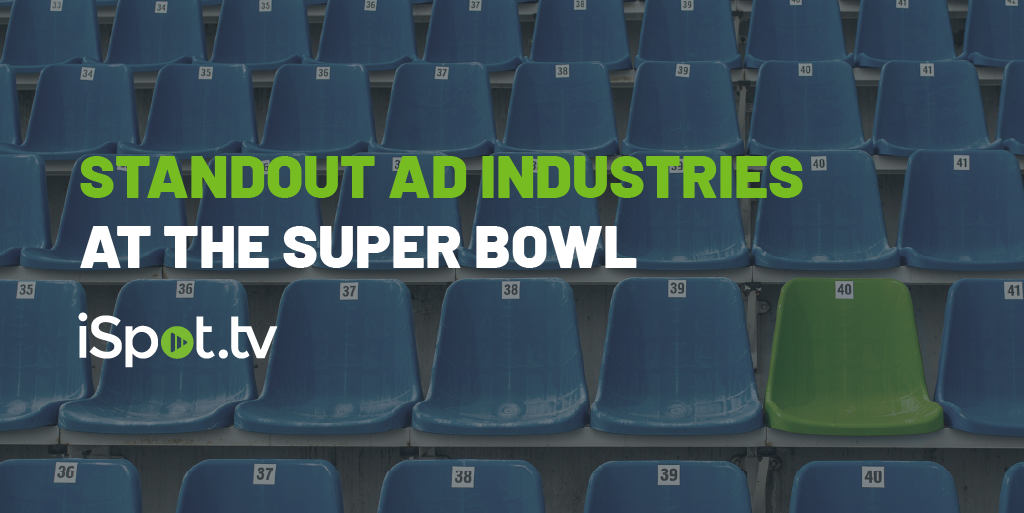 From a brand perspective, we already covered who won the “Big Game” with the top creative from this year’s Super Bowl. Taking a wider view, however, we can also observe which industries made it their own, generating buzz and positive feedback during game day.

(all data is game day only)

Despite fewer than normal, the four auto brands that advertised during Super Bowl LV — Jeep, Cadillac, GM and Toyota — still made an impact, netting 15.99% of digital share of voice among official game day ads. Jeep’s “The Middle” spot featuring Bruce Springsteen amassed nearly 15% of that digital SOV. The ad had 5% higher Attention than the norm for this year’s Super Bowl spots, while Likeability was 3% higher.

At 4.37% digital SOV, Cadillac was second among automakers with “Scissorhands,” the story of a made-up character named Edgar, who also has scissors for hands. “Curiosity” was the top emotion associated with the ad, while 44% of survey respondents thought that the Single Best Thing about the spot was the characters, played by Timothee Chalamet and Winona Ryder.

Consumer packaged goods brands (excluding beer) were all over this year’s Super Bowl, with both game day veterans and newcomers. Among the first-time CPG advertisers: Dr. Squatch Soap, Hellman’s, Huggies, Microban, Oatly and Rockstar Energy. In total, CPG brands combined for 29.55% of digital SOV on game day — with the lion’s share going to Mountain Dew.

It ends up that a million-dollar giveaway and a colorful spot were enough to generate 21.14% of digital SOV. Attention for the ad was 2.8% above the norm, while Likeability was 2.7% above. “Colorful” was the top emotional response, and 26% felt that those colorful visual scenes were the Single Best Thing about the commercial.

Utilizing a “flat” Matthew McConaughey, Doritos was second among CPG brands with 2.15% of digital SOV and “curiosity” being the top emotion from those surveyed. Cheetos’ star-studded “It Wasn’t Me” collected 1.51% of digital SOV, with Attention 18.2% above the norm and Likeability 20.9% above, and it was the funniest Super Bowl LV ad according to viewers.

Even with restaurants at limited capacity around the country, there was still a place for them — and the apps that deliver them — at the Super Bowl this year. Dining-related brands generated 3.35% of digital SOV on game day, with Uber Eats’ “Wayne’s World” and Cardi B spot accounting for the largest share at 1.75%. The partial nostalgia play had 33% of respondents liking the characters as the Single Best Thing about the ad.

Fellow delivery service (and Super Bowl freshman) DoorDash collected 0.56% of digital SOV while also making a play for nostalgia — which was the most common emotion from survey respondents when watching the Sesame Street-themed spot. Another newcomer, Chipotle, was third among dining brands with 0.32% of digital SOV, as “Can a Burrito Change the World?” eschewed celebrity cameos for corporate responsibility.

Notably, four of the six dining brands to appear during this year’s Super Bowl were advertising during the game for the first time (the other was Jimmy John’s). Pizza Hut and McDonald’s were the lone veterans.

Tech-related ads (not including wireless services) were a big portion of Super Bowl LV, as 12 different brands appeared during the game and combined for 15.97% of digital share of voice on game day. Much of that effort came from Amazon Echo, which made a splash with “Alexa’s Body” starring Michael B. Jordan, netting 13.84% of digital SOV. Overwhelmingly, funny was the top emotion associated with the ad — also earning 4.2% more Attention than the norm.

Fiverr collected 0.44% of digital SOV, in part by nodding to Four Seasons Total Landscaping in its spot. Squarespace wasn’t too far behind at 0.31% of digital SOV and a new take on Dolly Parton’s “9 to 5.” The ad’s “new” song was considered the Single Best Thing by 30% of survey respondents.

More than half of the tech brands to appear during this year’s Super Bowl were newcomers to the game, including Fiverr, Robinhood, Indeed, Logitech, Klarna, Shift4Shop and Mercari. Amazon was the longest-tenured Super Bowl advertiser of the group, having appeared during every game since 2016.

Movie trailers are typically a fixture during the Super Bowl, but this year’s game featured a bit of a role reversal with streaming services. Just two theatrical release trailers aired during the game — for Universal Pictures’ Old (0.63% of digital SOV) and Disney’s Raya and the Last Dragon (0.48% of digital SOV). Overall, entertainment properties (excluding the NFL itself) made up 25.13% of digital SOV.

Disney+ led the way with two separate spots totaling 11.72% of digital SOV. Its Falcon and the Winter Soldier ad was among the most popular on game day, netting 11.66% of digital SOV on its own as Marvel fans were buzzing about their first extended look at the show debuting in March. Audiences also found Disney+’s bundle ad arresting — the top emotional reaction — as it showcased what viewers could watch across Disney+, Hulu and ESPN+.

While CBS promoted its own shows during the game, much of ViacomCBS’s time was dedicated toward streaming service Paramount+. The rebranded version of CBS All Access captured 7.26% of digital SOV. Among the many ads from Paramount+, “Sweet Victory” was a favorite, earning 11% higher Attention than the norm and 9.4% higher Likeability. Nearly half (48%) of survey respondents found the characters — including SpongeBob SquarePants — the Single Best Thing about the spot.