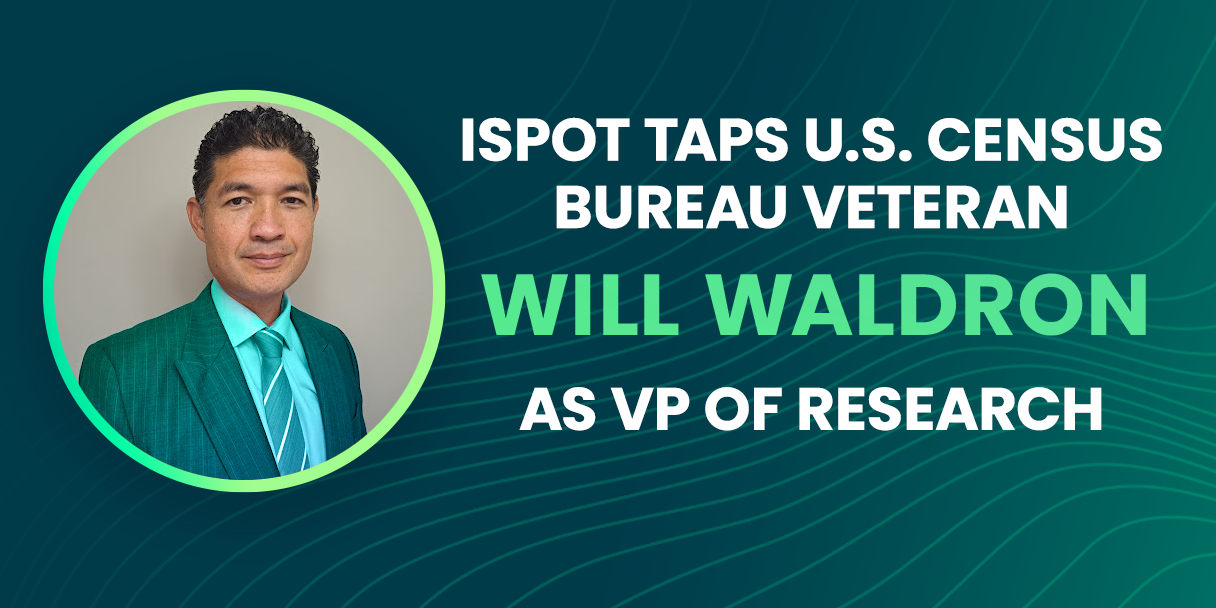 As iSpot continues to forge a new TV measurement and currency path for our brand, agency and network customers, it is critical that every second of TV advertising is verified across platforms and that all audiences are accurately accounted for.

To do this, iSpot uses a variety of inputs from a viewership panel of 6,000 people from TVision, to calibration from 12 million set-top boxes, to massive integrations with major data providers, to glass-level verification from the industry’s largest smart TV measurement panel of 40 million devices from 7 different manufacturers.

But the scale of data alone is not sufficient to ensure all houses and all people are accounted for — and so, it is with great excitement we welcome veteran statistician Will Waldron as Vice President of Research where he will oversee statistical quality standards and methodological practices at iSpot.

Learn more about Waldron’s new role at iSpot below and look for more on this important topic in the weeks and months ahead.

In this role, Waldron will focus on data fidelity, measurement veracity and ratings reliability. He will have oversight of iSpot’s diverse, representative audience panel, which includes the largest pool of smart TV viewers for the purposes of measurement in the industry. Among his responsibilities will be oversight of iSpot’s Media Ratings Council (MRC) accreditation process, the first stage of which will be completed later this year.

Most recently, Waldron was a lead scientist at the U.S. Census Bureau within the Demographic Statistical Methods Division. There, he led teams of mathematical statisticians in the sampling and production of national surveys for federal statistical agencies within the CDC and Department of Labor. He also spent 6 years at Nielsen managing teams of research statisticians to measure and model television, radio and digital audiences, and developed mathematical models for solving complex audience measurement issues.

“iSpot is ushering in a new era for audience measurement and one that can make the TV marketplace more equitable,” said Waldron. “iSpot recognizes the societal value of properly measuring the TV consumption of racial and ethnic minorities in service of the most representative sample of viewing. Advertisers and networks want to reach these communities to better address their unique needs with more specialized product offerings. Minority communities are thus better served when their specific media consumption is more reliably measured.”

Obtaining quality survey estimates for racial and ethnic minorities has historically proven difficult and has often been overlooked by the industry. In the past, challenges have arisen due to smaller populations, lower survey response rates and lack of accessibility options. However, iSpot’s methodology overcomes these obstacles for the largest racial subgroups in the U.S., including Black Americans, Asian and Pacific Islanders, and Hispanic Americans using the largest panel of smart TVs for measurement in the U.S.