At a Medieval feast, a king sniffs his soup and calls for his poison checker. The checker takes a sip and collapses into the ground. A narrator says it's sometimes better to let others go first. In a laboratory, a man hops into a teleportation pod and gives a thumbs-up. The scientists activate the machine, and the man emerges from the second pod with all of his limbs and his head rearranged on his body. In the Wild West, a cowboy hiding behind a rock asks his partner to check and see if the coast is clear. His partner stands up and is pelted with a barrage of arrows. The narrator likens these instances to using the Cars.com app, which features customer and expert reviews. This ad from Cars.com ran during Super Bowl XLV on Feb. 6, 2011. 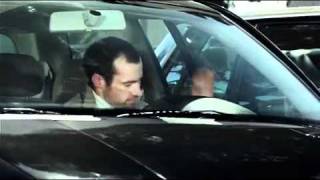