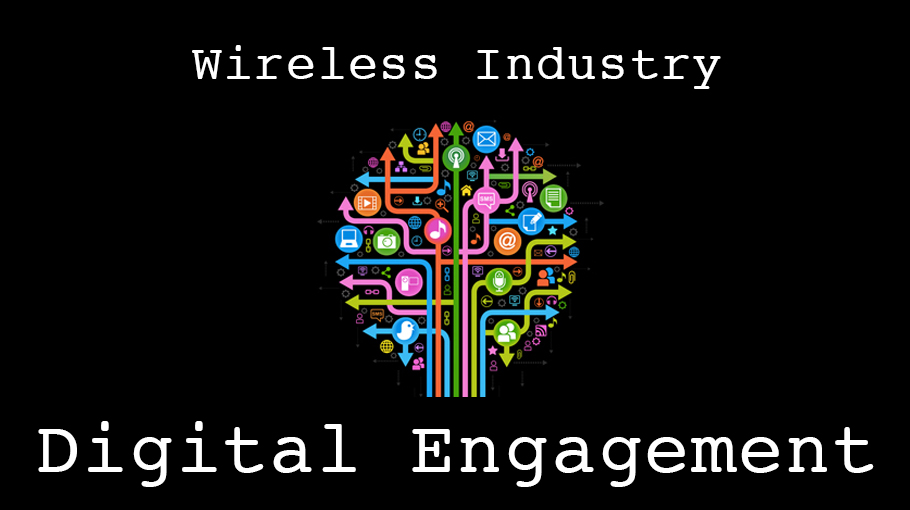 An incredibly competitive landscape, often cutthroat advertising tactics, and ever-evolving products make the wireless industry a particularly tough one. AT&T, Sprint, Verizon and T-Mobile are always looking for new ways to get ahead of one another, but what really leads to success?

In an effort to shed some light on this, we compared FierceWireless data on net customer additions per quarter with our own and explored the relationship between digital engagement, campaign choices and customer additions. We also took an in-depth look at the fastest growing carrier, T-Mobile, to get a better understanding of the reasons behind its rapid growth. 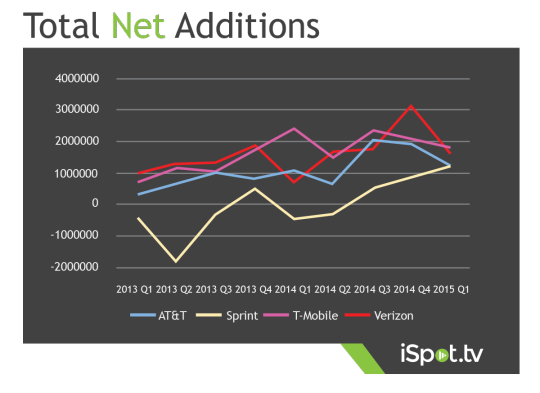 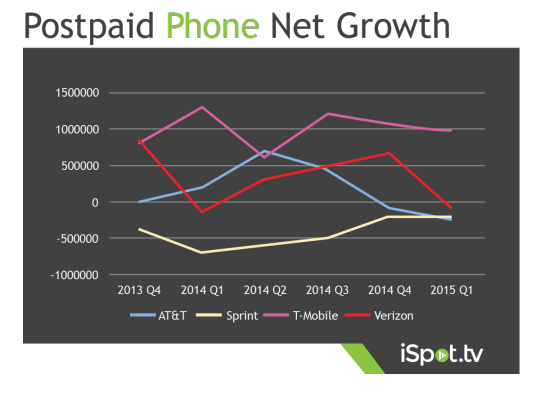 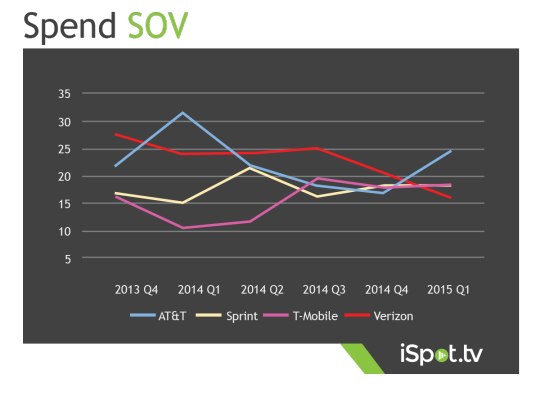 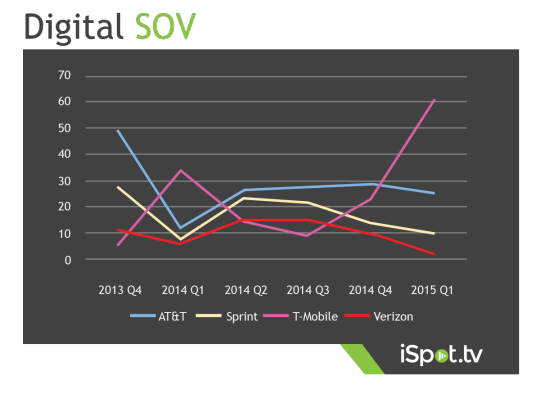 AT&T: At the start of 2014, AT&T switched tactics, moving away from its popular Kindergarten focus group ads to a new campaign featuring store employee, Lily, as a Flo-from-Progressive style spokesperson. You can see from the drop in Digital SOV that, while not as digitally engaging as the kid-focused commercials, the ‘Lily’ ads have proven more effective at actually generating consistent growth. This campaign has been going strong since late Q1 2014 and, according to an article in AdWeek, won’t be ending anytime soon.

Sprint: 2013 was a rough year for Sprint. After experimenting with a number of different creative campaigns, its inconsistent messaging left it in last place for growth. Things began to turn around in 2014, however. Sprint increased spend and focused on its ‘Framily Plan’ campaign to a rapid increase in digital SOV and some slow, but steady, customer growth. Customers took notice of their ‘Cut Your Rate Plan in Half’ campaign in Q4 2014, targeted at poaching Verizon and AT&T customers. But it’s their latest campaign with David Beckham that looks to be the most promising. ‘Followers’ is performing remarkably well with a 9.0 ad effectiveness score, 76 percent positive in tweet sentiment and an impressive 41.15 percent digital share of voice.

Verizon: 2014 Q1 saw a downturn in growth for Verizon. T-Mobile began advertising heavily against their competitors, but Verizon failed to react. As a result, net subscription additions and digital SOV both took a dive. They managed to get their numbers back up, but with the help of some cost slashing promotions and holiday sales in late 2014. In 2015, Verizon finally retaliated with an ad aimed directly at taking back some of its poached customers. ‘Come Home for $300’ offers $300 to those willing to return to Verizon. With a digital SOV of just 2.44 percent, it’s unclear if this will have any significant impacts on growth.

T-Mobile: Currently highest in net subscription additions, highest in postpaid growth, dominating in digital SOV and still managing to keep spend consistently low, it looks like T-Mobile is the wireless carrier to watch. With its recent announcement of another 2.1 million net customers added in Q2, possibly landing it in the coveted third place spot currently occupied by Sprint, it seems as though T-Mobile has it all figured out. What is the secret to its success?

2013 Q1-3 T-Mobile’s first iteration of the Un-carrier campaign began in Q1 of 2013 to a rocky start. Despite being the first ever major wireless company to cut contracts, it debuted to low net additions and negative tweet sentiments.

2014 Q1 T-Mobile hit its stride in early 2014 with its offer to pay off customer’s early termination fees. This, in combination with its wildly successful Super Bowl ads featuring 2014’s popular athlete, Tim Tebow, resulted in huge peaks in net growth and a 26.75 percent digital SOV.

2014 Q2 saw no new Un-carrier offering until the end of the quarter, possibly explaining the dip in additions and digital SOV. During this time, T-Mobile continued airing the ‘Break up With Your Carrier’ ads, as well as some ‘Unlimited Talk and Text Promotions.’

2014 Q3 stood out as one of T-Mobile’s highest quarters in terms of growth. This quarter’s Un-carrier move was removing data charges for music streaming. But considering the lack of Digital SOV that normally accompanies new Un-carrier reveals and an ad effectiveness score of only 5.2, it’s likely this peak in growth is due to the 4 Lines for $100 promotion that they were pushing.

2014 Q4 This quarters big offer was Data Stash: unused data that you can keep for up to one year. They also ran a promotion where every line in qualifying plans got a free 10GB of 4G LTE data. These promotions did well, with a slight upturn in digital SOV and steady growth.

2015 Q1 No new Un-carrier offer this quarter, but that didn’t matter. T-Mobile’s three Super Bowl ads were a huge success. Each earned an ad effectiveness score above a 9.0 and ‘Kim’s Data Stash’ landed a 27.89 percent digital SOV. Its ‘Data Vulture’ commercial featuring comedian, Rob Riggle, stood out as the first ever original advertisement created for NBC’s mobile streaming application and earned 1,385,178 online views. Combined, they racked up some impressive stats: 36.7 million YouTube views of the ads and teasers and more than 300,000 social actions taken.

2015 Q2 & Q3 T-Mobile’s last two quarters have consisted mainly of ads directed at getting customers to make the switch. Recently, they have begun airing distinctly anti-Verizon ads; ‘Never Settle for Verizon’ is receiving some negative reviews, with a tweet sentiment of only 23 percent. But for T-Mobile, it seems any publicity is good publicity.

The Factors Behind T-Mobile’s Peaks in Growth

Digital SOV is generally a good measure of success, but for T-Mobile, digital leadership is particularly important. CEO John Legere has made it his mission to break the rules and disrupt the industry; a strategy that largely appeals to a younger demographic. This is apparent when you note that T-Mobile, more than any other wireless company, had a clear correlation between tweet sentiment and net additions. This means that T-Mobile’s customers are actively voicing their opinions online and listening to the opinions of others. By capturing this young and vocal demographic now, they can lock them in for life. 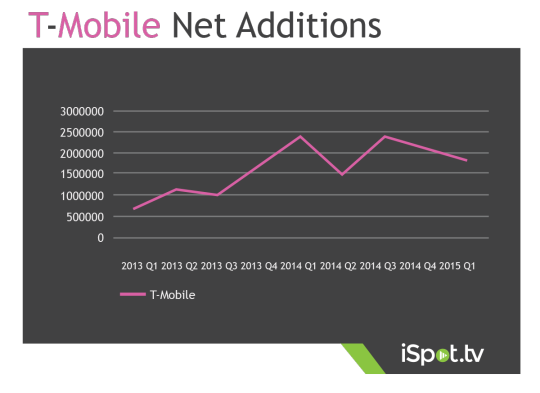 T-Mobile has capitalized on this knowledge by tailoring its marketing to appeal to millennials. It frequently features up and coming musical artists in its ads, creates youth oriented Un-carrier offerings (cost-conscious plans and deals on data and music streaming) and carefully chooses millennial friendly celebrities: Chelsea Handler, Sarah Silverman, Bill Hader, Kim Kardashian and the latest, Joel McHale, all to measurable results. T-Mobile’s digital domination is no coincidence; it’s a carefully constructed strategy that, so far, is succeeding. 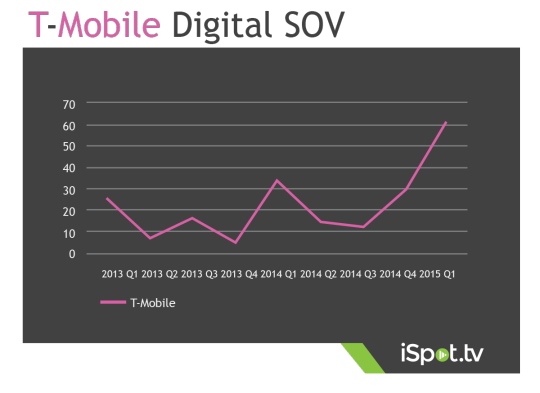 Since 2013, T-Mobile has been the driving force behind changes in the wireless industry. It has unveiled nine Un-carrier moves focused on the customer, their needs and their pains. Each offering more freedom, flexibility, better network or better quality. By pioneering these changes, T-Mobile benefits by forcing its competitors to react to its offers. It has created a new standard in wireless and, based on its steady growth throughout the course of the Un-carrier campaign, customers are taking notice. 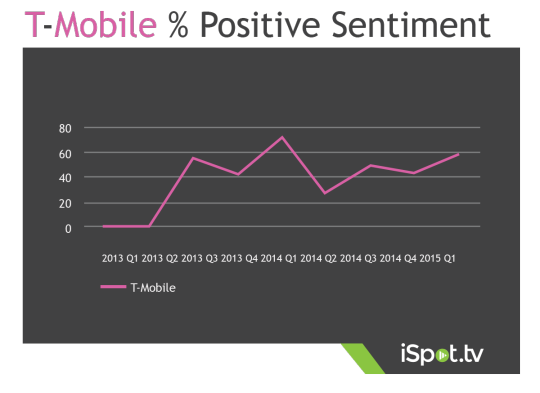 There is no single formula for success in advertising, but there does seem to be some trends. When brands have consistent messaging, such as T-Mobile sticking to their Un-carrier campaign, they tend to perform better. Sprint’s 2013 slump can be seen as a testament to the danger of doing the opposite. Quickly reacting to the competition has also proven to be a successful tactic. In 2014 Q1, Verizon ignored growing rumblings from its competitors and took a significant dive in customer additions. The last, and possibly most important, trend is catering to the customer. It may seem obvious, but before T-Mobile did away with contracts, they were the norm. That move started a trend of increasingly customer-friendly offers (see Sprint’s ‘Cut Your Rate Plan in Half’ and Verizon’s ‘Come Home for $300’) that don’t seem to be stopping anytime soon. As this game of one-upmanship continues, it will be interesting to see if they begin to result in diminishing returns.