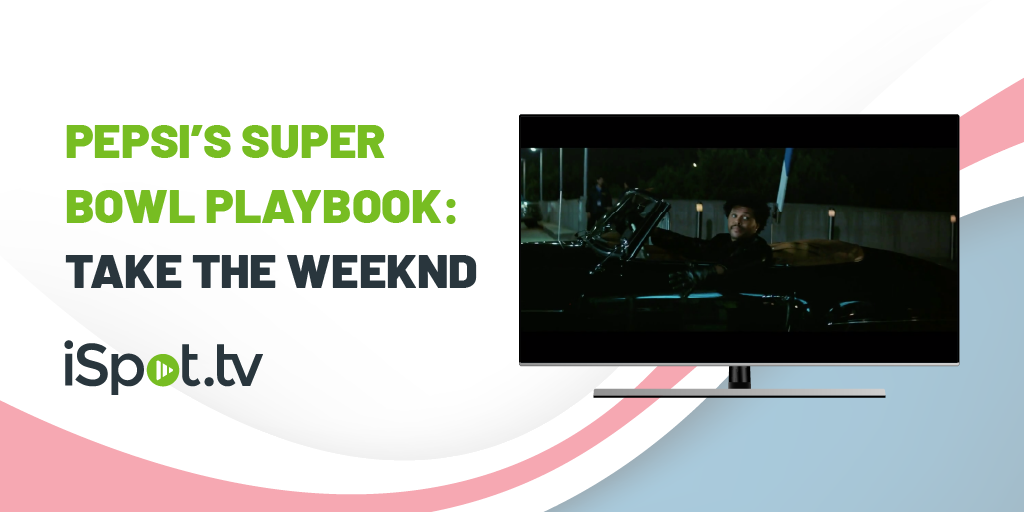 After a decade that’s seen Pepsi produce 11 Super Bowl ads, PepsiCo has announced that it will bench its flagship brand for Super Bowl LV.

But Pepsi is still storming the big event as title sponsor of the halftime show starring The Weeknd, who appears in what is to date the most buzzed-about TV ad among the pre-release pack in the iSpot.tv Super Bowl Ad Center so far.

And while PepsiCo is choosing not to fork over $5.5 million or so to drop a 30- or 60-second ad for the reach of the big game, consider the $31.7 million (est.) that it’s invested in its halftime teaser. The promo has generated 651 million TV impressions over 720 (sports-centric) airings so far, giving the brand heavy frequency during playoff football with household decision-makers who are most likely to spend with Pepsi during this month.

Want more reasons why Pepsi’s bet on the halftime promo is looking to pay off? According to an iSpot Ace Metrix survey, while music is what people like most about the creative, the majority (64%) of respondents identify Pepsi as a primary message, and viewer comments are overwhelmingly positive; across the board, the halftime teaser is outperforming ads for the brand and in the soft drink category.

PepsiCo is a dominant TV investor. Pepsi itself has led the soft drink advertising category so far this year with 48% of industry spend, and PepsiCo owns the top two brands (in terms of TV advertising spend) going back to January of 2020 between Pepsi (18%) and Mountain Dew (20%).

The soft drink giant understands TV and has a history of getting a lot of attention for its Super Bowl commercials. For instance who could forget the 2018 Doritos Blaze vs. Mountain Dew ad, which outperformed the pack that year? (Doritos are made by PepsiCo’s Frito-Lay North America unit.)

In 2020, Pepsi Zero Sugar rocked out with Missy Elliott and H.E.R. in a “surreal” Super Bowl spot

In 2019, Steve Carell, Cardi B and Lil Jon passionately explained why Pepsi is “more than ok.”