NFL Returns: TV Ad Insights From the First Month of the 2020 Season 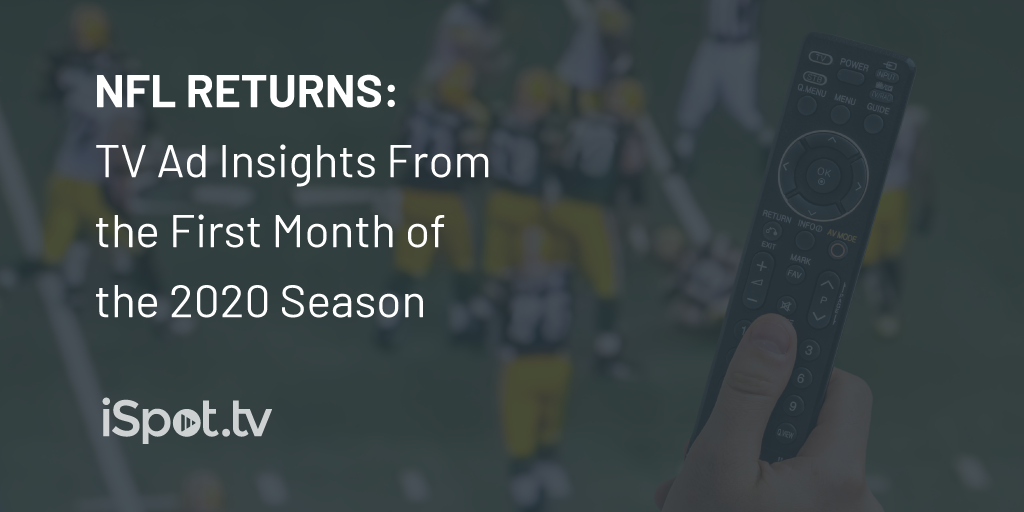 COVID-19 was a hot topic during the first four weeks of the NFL’s 2020 season, and it’s sure to grow for the rest of this fall as well. As cases pop up around the league, we’ve already seen numerous games get moved — with more likely to come, too.

But for the time being, Sundays are still focused on football and the brands appearing during games. As a whole, TV ad impressions for live NFL games may be down over 11% year over year, but the league also faces some unique challenges: Increased competition for sports fans’ attention on TV right now, an upcoming election, the pandemic and various scheduling changes.

Despite all of that, ads from brands like GEICO, Verizon, Progressive, and State Farm have each surpassed over 500 million impressions on the season through four weeks. Attention for ads is also up compared to the same time period from last season. iSpot’s average Attention Index was a 99 during the first four weeks of the 2019 season, but 111 this year.

Insurance brands (9.26%), quick serve restaurants (8.99%) and Automakers (8.48%) led the way in terms of ad impressions, with insurance actually boosting impressions by 5.4% compared to the first four games of last season. QSRs were up even more, increasing impressions by 15.9% year over year.

Though many of the top NFL advertisers can look similar from one year to the next, several brands posted major gains compared to the same time period last year. Subway saw a 124% increase, while Chipotle was up 61% and Lowe’s jumped 60%. Some of the more notable new advertisers during games were: DraftKings, Google, Biden for President and Microsoft Office, among others.

As the 2020 NFL season progresses, iSpot will be providing weekly insights around top brands and spots, plus key trends to keep an eye on as the league and broadcast partners continue to juggle shifting audience behaviors and scheduling concerns.

Check out our NFL ad center for weekly updates, and contact iSpot to learn more about how we can deliver similar insights for your own TV advertising needs.