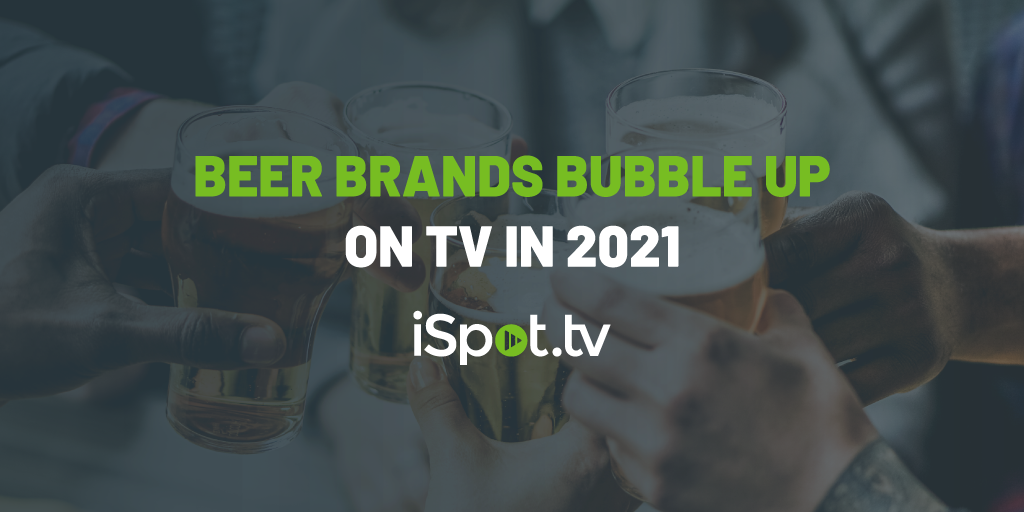 With bars and restaurants closed to indoor dining for much of 2020, and most live sports sidelined for months, Beer brands took a backseat. But with live sports back in full swing in 2021, along with successful initial vaccination rollouts, beer brands have spent 2021 sprinting back to TV.

From Jan. 1-Aug. 15, 2021, Beer brands spent an estimated $525.8 million on national linear TV ads, vs. $352.4 million during the same period in 2020. As one might expect, the jump comes from live sports. Over 56% of the Beer industry’s spend so far this year comes from live sporting events, led by the NFL, NBA and college basketball action.

And Beer brands have also grown their share of TV ad impressions during sports tentpole programming to capitalize on a summer of getting “back to normal.” In particular, during the Summer Olympics, Beer ads grew to 4.2% of all impressions (vs. 2.9% during the 2016 Rio Olympics).

But which brands are driving the increase? For one, it’s Mexican Lagers.

The continued emergence of hard seltzer drove spending as well. From Jan. 1-Aug. 15, 2019, hard seltzer brands made up about 4% of Beer industry ad spend. That number shot up to 24.7% during the same period in 2020, then over 28% in 2021. Interestingly, however, the increase still leaned on the same programming from an impressions perspective — perhaps indicating that Beer brands aren’t looking to find new consumers as much as diversify the product offerings for existing ones.

With that in mind, we took a look at some of the top Beer industry TV ad creatives in 2021, using the Ace Metrix Creative Assessment, to see which may have resonated best with audiences. Each ad was benchmarked against 2021 Alcohol industry norms.

A beachy spot for Corona’s hard seltzer made a splash with consumers. Ace Metrix Creative Assessment data shows the creative garnered 13.4% more Attention than the norm and is 15.8% more Watchable. Viewers found the ad to be “cinematic” and “soothing,” while 39% agreed that the visual scenes were the Single Best Thing about it.

Anthony Anderson served as the face of Smirnoff’s “patriotic” holiday beverage campaign, promoting the brand’s Red, White & Berry Hard Seltzer. Viewers found the spot 8% more Relevant than the norm and 6.8% more Persuasive. Anderson, the main character, was the Single Best Thing about the spot, according to 19% of survey respondents.

Modelo’s Fighting Spirit campaign continues to shine a spotlight on the hard work and sacrifice of impressive individuals; this time focusing on celebrity barber Philly “BarberKing” Garcia. The ad was 6.5% more Likeable than the norm and 7.7% more Watchable.  Eighty-two percent of survey respondents accurately identified Modelo as the advertiser (20% higher than norm).

Truly wants audiences to know about the fruity flavors of its hard seltzers, and this spot gets the message across. The colorful, kaleidoscope visuals were the Single Best Thing about the creative, according to 46% of survey respondents. They also drove strong Breakthrough performance, as “Big Lemonade Flavor” scored 14% above Likeability and 13% above Attention norms. The visuals also communicated information about the product (15% better than the norm). Ultimately, the spot drove incredibly strong positive Purchase Intent among Gen Pop viewers (17% above the norm).

Starting just before Memorial Day, Budweiser rolled out American flag-themed cans for consumers looking to make their beer look a little more festive this summer. The straight-forward spot announcing the new packaging was 6.5% more Likeable than the norm, and was 12.3% more Relevant than other Alcohol industry ads. Most of all, the creative made viewers “thirsty” and triggered “nostalgic” feelings, according to data from Ace Metrix Creative Assessment.

Want to learn more about which industries are growing on TV and how effectively ads are communicating with consumers? Get in touch with iSpot today.