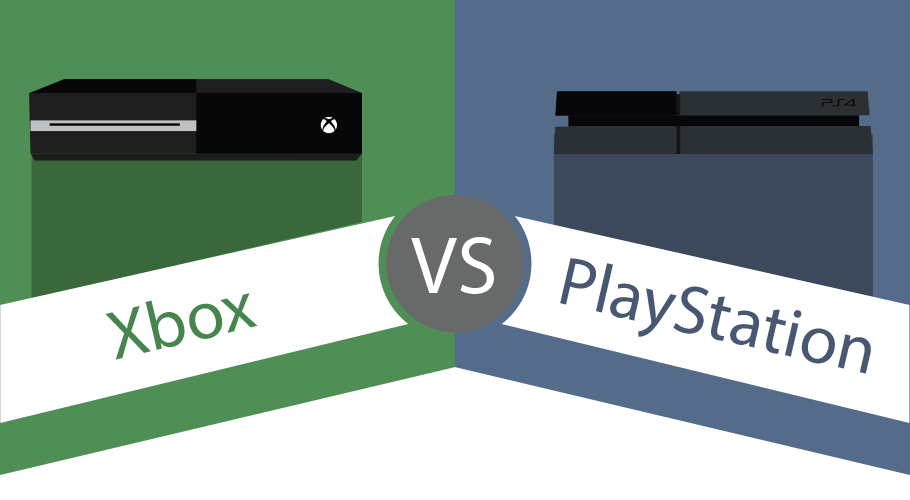 Xbox and PlayStation are the kings of the eighth-generation console war. Each have dedicated followings and loyal fans, but when competing head-to-head, which one of these gaming titans comes out on top with its online presence? Who’s getting the most favorable reception and the biggest digital buzz for their ad dollars? We decided to dig into our data to see how they stack up with online sentiment and digital engagement.

The Xbox One: Off to a Late Start

The Xbox One and the PlayStation 4 were both released in November 2013. While the PS4 immediately got off to a strong start, the Xbox One’s debut came after months of controversy over new DRM policies that would require mandatory 24-hour connection check-ins and put restrictions on trading and lending games. In response to the overwhelmingly negative feedback, Microsoft reversed the policies, but not before Sony’s PlayStation 4 got a huge head start that Xbox continues to struggle to catch up to today. 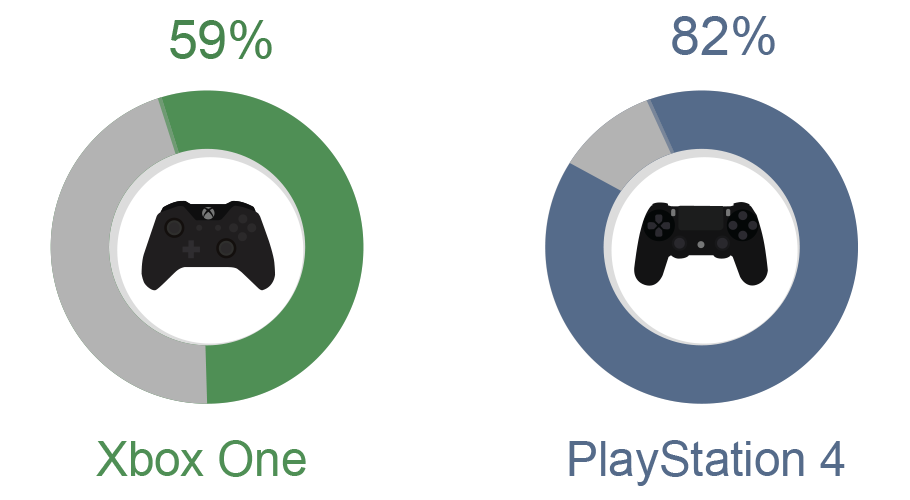 This struggle is evident when you look at Xbox’s tumultuous tweet sentiment over the past two years. Up until August 2014, PlayStation had steadily higher positive sentiment, averaging 90% to Xbox’s 61%. Even after Phil Spencer took over as the head of Microsoft’s Xbox division and promised to return the focus to “gaming first” in March 2014, the company’s positive sentiment still lagged behind at just 59% positive. The tide turned for Xbox in September 2014, when an increase in spend and an NFL campaign featuring Drew Brees and Marshawn Lynch earned it more positive sentiment than PlayStation for the first time – 81% to PlayStation’s 70%. After that, the gap between them lessened and their sentiments began to more closely match up, leaving their averages for Sept. 2013 – Sept. 2015 at 59% positive for Xbox and 82% positive for PlayStation.

PlayStation in the Lead With Sales, Falling in Digital Share of Voice

In addition to tweet sentiment, Xbox has historically fallen behind PlayStation in sales as well.  According to Forbes, in Q2 of 2015 “Microsoft reported a total of 1.4 million Xbox One and 360 combined sales…less than half of Sony’s PS4 sales.” In fact, the PlayStation 4 consistently outsold the Xbox One up until last year’s holiday season, where Xbox’s steep discounts helped snag it the lead.

Since Xbox’s upswing, however, the race has been more neck-and-neck. Looking at the start of Fall 2015 (Sept. 1 – Oct. 7), tweet sentiment for Xbox was lower than PlayStation’s, but both were consistently high, with Xbox averaging 86.2% positive and PlayStation averaging 99.3% positive. And, with the release of Halo 5: Guardians, Xbox and its affiliate, Microsoft Studios, have been earning the majority of the Digital Share of Voice (the percent of online engagement a brand or spot receives compared to others in its category) in the Mobile and Video Games industry.

Because Digital Share of Voice is often directly impacted by spend – more exposure to an ad increases the likelihood that people will be talking about it online – we also compared the two on Share of Voice Index, a metric that determines whether a brand is getting more or less digital engagement for its money. While both brands were in the negative (Xbox: -0.09, PlayStation: -1.17), Xbox fared better in this area as well. So, even when the spend discrepancies are factored in, it’s clear that Xbox is still coming out on top.

Xbox Wins the Battle, but PlayStation’s Still Winning the War

Based on our analysis, as of Fall 2015, Xbox is performing better than PlayStation. This jump can be credited to Microsoft Studios’ upcoming release of Halo 5: Guardians. The Halo 5: Guardians commercials – “A Hero Falls” and “Launch” – have seen huge success, scoring 9.6/10 and 9.5/10 ad effectiveness scores, frequently landing on our most engaging commercials list and earning a combined 368 million impressions since their release.

However, while PlayStation may be currently behind, its track record cannot be ignored. PlayStation has had consistently higher positive tweet sentiment and its digital engagement average for the past two years stands at 10% compared to Xbox’s 6.6%. Additionally, Wedbush Securities Industry Analyst Michael Pachter predicts that “the PS4 is heading for around 120m to 130m units sold in its lifetime, while the Xbox One will fall short … reaching around 100m to 110m in comparison.” Based on this, it’s unlikely the Xbox will ever catch up to PlayStation’s enormous lead, at least in this console generation.

Moving forward, both consoles have some upcoming rollouts that could impact their sentiment and engagement ratings. PlayStation has lowered its console price down to $349.99; released a bundle of its popular Uncharted games entitled Uncharted: The Nathan Drake Collection; and announced new holiday bundles to get shoppers started early.  Xbox has also promoted special holiday bundles and will release the latest Lara Croft installment –  Rise of the Tomb Raider – on November 10th. Finally, the Microsoft video gaming brand has also recently announced a future Windows 10 integration that should definitely get people talking. Keep checking iSpot.tv for updates as these changes in the gaming industry play out.