Discovery Networks is taking some bold steps this season to better appeal to advertisers, ditching the glitzy presentations of years past and instead traveling to buyers directly. On the docket are at least five new original series, a stated intention to focus on more authentic reality-based programming (read: no more man-eating anaconda stunts), and an effort to appeal to more women as well as a broader variety of men.

And there is a lot riding on this Upfront season. Discovery has told analysts to expect increasing revenues this year over last, yet is facing a critical carriage renewal deal with Comcast this June that could impact its results. Given that the network and Comcast are at odds over the cable company’s proposed acquisition of Time Warner Cable, Discovery needs to come away from its Upfront schedule with some big advertiser wins under its belt to carry some momentum into those talks.

While Discovery is making a concerted effort to program directly to viewers via digital channels, and has criticized Nielsen’s “undermeasuring” of its ratings across digital devices, an analysis by iSpot.tv shows the network reporting strong TV ad results.

Most notable is the consistent ROI advertisers are seeing across industry segments. The top advertisers by industry are, in order of spend, Automakers, Fast Food, Wireless electronics, Insurance Companies and Movie Studios. All have a fairly flat SOV index, meaning that on an industry level the money spent airing more commercials directly correlates to a higher Digital SOV result. In other words, advertisers willing to spend more dollars will see more Digital SOV as a result. There’s no drop off of efficiency in their spend that we can see. 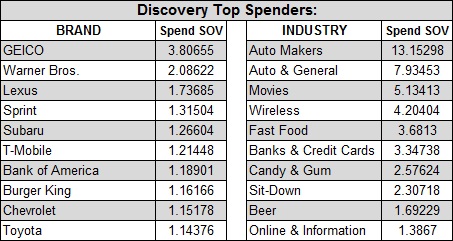 From a brand-specific standpoint, there is a little more variety in performance. As the graph below shows, some advertisers received a much better return on their Digital SOV for the money they spent. AT&T and T-Mobile saw far greater bang for their buck than rival Sprint in the wireless category, and in the automotive category Acura and Mercedes-Benz enjoyed a similar over-indexing of ROI over competitor Subaru. These brand-specific results are likely the result of creative performance tied to the ads themselves than the network or target viewer. 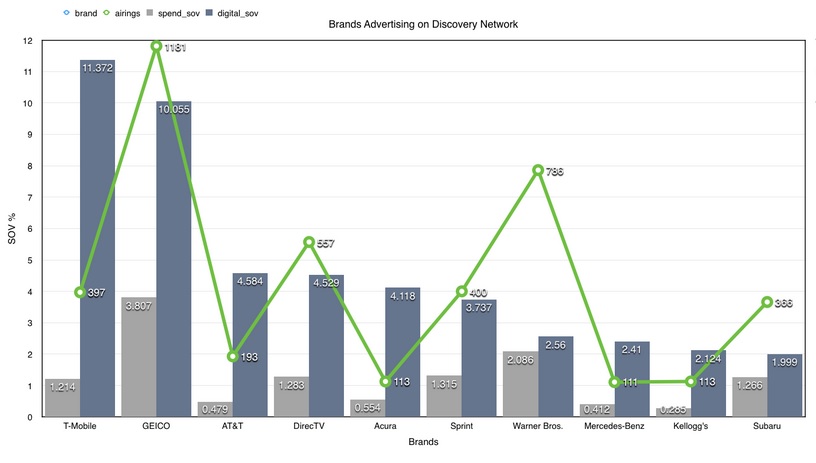 Most of this activity is spread across its many networks and shows. In the last 12 months, Discovery and its top four networks have run more than 1 million ads, with Animal Planet responsible for the largest volume (257k) while TLC owns the broadest brand mix (1,303 brands). Meanwhile, Alaskan Reality Shows account for 34.35% of the digital activity surrounding TV ads on the Discovery Network. read on for a more in-depth analysis of the numbers…

Overview
In the last 12 months, Discovery has run ads for 1,204 brands with almost 200k commercials.

This year alone Discovery has aired commercials for 645 brands with 41,123 commercials.

*TV Network promotions account for 12.98% of in network and out of network spend values

– Heirs to the Dare, which only had 35 commercial slots times this year, indexes at the top of the list and is most likely to generate a digital response to advertising with almost 2% of digital activity since Jan 1, 2015.

Most Engaging ad for Discovery in 2015: AT&T: Really Appreciate featuring Milana Vayntrub, generated more than 2,200 explicit social reactions during just 50 airings, making it the single most active ad on Discovery since the new year. (4.13% of Digital SOV – 50 Airings – 2,212 Social Actions)