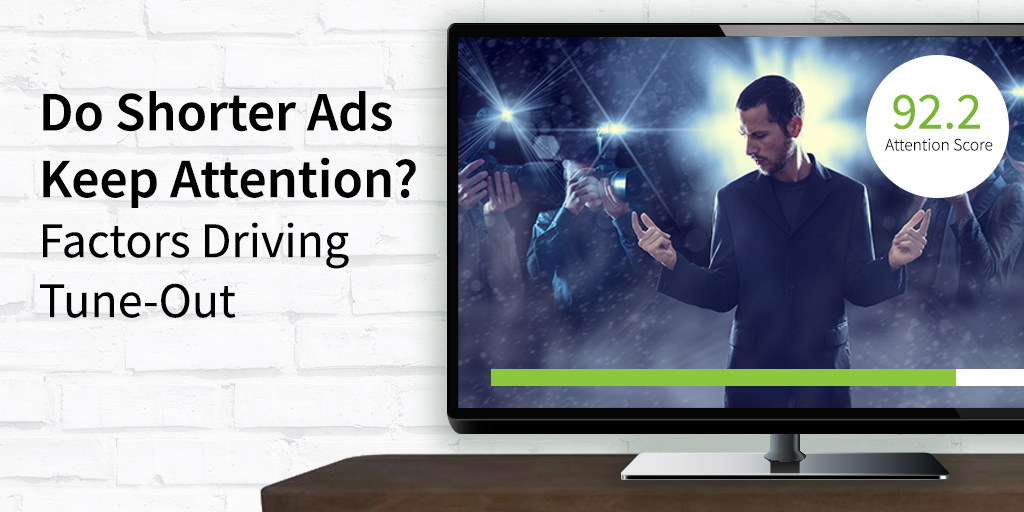 iSpot.tv tracks TV ads at scale and produces a wide range of analytics– among them, the propensity for interruptions or “attention.”  This week we’re releasing findings from a recent analysis of 37,854 TV commercials across 4.7 million TV ad airings, across all formats, in which we decipher the biggest factors driving interruptions.

When viewed at scale, a few factors stand out as core to ad break retention or viewer flight. These include the ad creative, the show it appears within and viewer fatigue or “creative wear.”

Length Matters: It stands to reason that the shorter window one has to interrupt an ad, the less likely he/she is to do so. This dynamic plays out when looking at benchmarks based on duration only.

As 60 second TV ads drop in popularity, the 6- and especially 10- second ad is on the rise.

So why not stuff a bunch of 6, 10 or 15 second ads into an ad break? The number of creatives is also a large factor in driving tune out. People tend to react negatively to an overload of creative changes.

The ad’s duration is only one aspect of the creative, but when ad length is tracked across millions of ads and airings, trends emerge that reveal considerable insights.

Frequency and burn-out matter: Most ads start out with high attention scores. It’s new information and people are more willing to sit through something fresh. But those punchlines lose their punch after the third time and creative wear starts to set in.

Example: Walmart’s campaign,  “Let’s Get It Started”  containing a mix of creatives, is by far 2018’s most seen back to school campaign with 2.8 billion TV ad impressions on $39.7mm spent. But the more than 10,996 airings are showing signs of creative wear. This campaign is 25% more likely to be interrupted than other current creatives by the company.

Creative Matters: Industries such as auto, travel, and entertainment consistently outperform other categories in part because the production quality is usually higher.

Fill out the form below for a download of the full study.