During the Oscars, Adobe debuted its impressive, artsy commercial, “Dream On.” The 60-second commercial barraged the senses with vibrant colors, striking graphics and a killer soundtrack. After its first airing, the commercial immediately secured second place, behind Adidas, on iSpot.tv’s most Engaging Ads of the Week. Only three days after it aired, Adobe’s new ad replaced Adidas for the title of iSpot.tv’s most Engaging Ad of the Week, breaking Adidas’ six-day streak.

Adidas’ “Take it” TV spot also made the list after its first airing on Feb. 14. After five days, “Take It” went from fifth place to first place, where it remained for the best part of a week. Since it first aired, “Take It” gained more than 26 million online views and earned a 9.9 Ad Effectiveness rating,while the average industry rating is 6.8. Adobe’s “Dream On,” which has only been airing a few days, has 1.38 million online views with a 9.5 Ad
Effectiveness Rating in an industry where the average rating is 5.4.

Despite having fewer online views than Adidas so far,
Adobe’s spot surpassed Adidas’s Digital Share of Voice (SOV) numbers. Digital
SOV compares a list of top spots driving the most engagement compared to the
online activity of its other active ads. The Digital SOV for Adobe’s ”Dream On”
is 97.73 percent compared to Adidas’ “Take It” with a Digital SOV of 70.98. The
Spend SOV’s are more competitive. 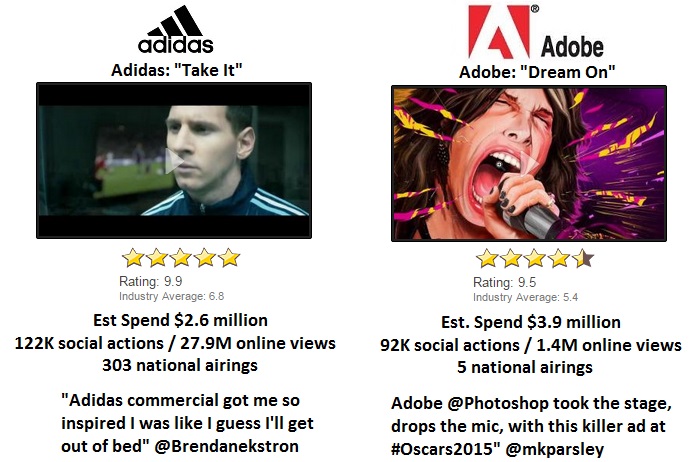 Adobe was quick to make it to iSpot.tv’s list of engaging ads
of the week with a striking and engaging commercial that focused on the power
of Photoshop. Furthermore, it replaced Adidas at the number one position almost
as quickly. The fact that “Dream On” debuted during the Oscars, which had
millions of viewers, helped boost its visibility, and evidence that investing
big money during major events pays off, and often quickly. For both brands,
it’s about quality over quantity. “Dream On” is Adobe’s only spot for 2015.
“Take It” was Adidas’ second spot of the year and was powered by big stars, and
a new focus on American sports. Adobe and Adidas have started strong and have
definitely set the bar high for themselves and for their competitors in 2015.