Emerging Advertisers: Which Brands Ramped Up TV Ads the Most in Q3? 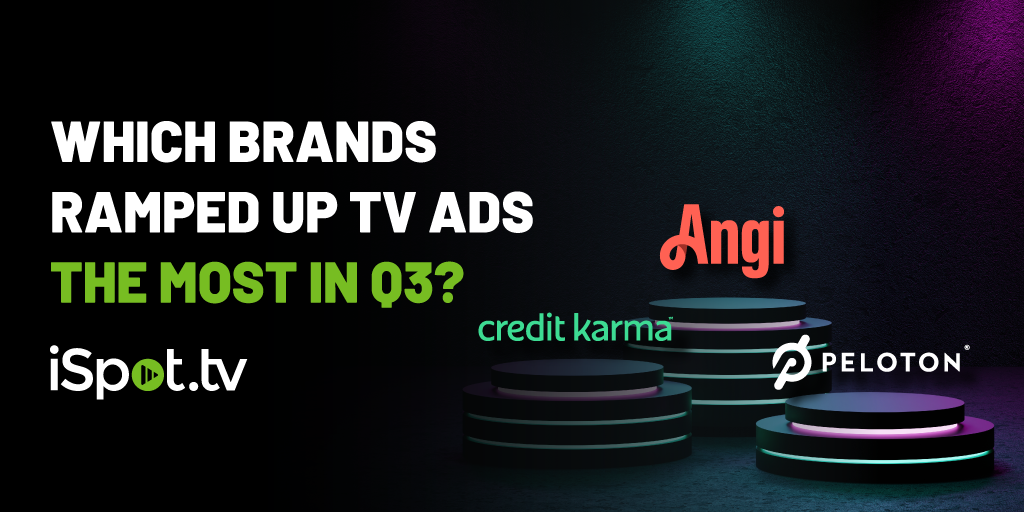 While it’s easy enough to guess which brands had the most impressions (or spend) on TV during Q3, the most interesting story is in the margins: Which brands grew the most during Q3, compared to the same time period the year before?

Of the top 100 advertisers by impressions in Q3, the following are the ones that ramped up TV ads the most compared to last year:

What do you get when you merge Angie’s List and HomeAdvisor? A new TV advertiser. Since the two sites combined forces, Angi spent nearly $30 million on television, with all of that occurring since April 2021. The brand buys nearly half of its ad impressions during either daytime or primetime, with about 24% dedicated to each daypart.

After not appearing at all on national TV during Q3 2020, Credit Karma was among the 60 most-seen advertisers in Q3 this year. Though the personal finance company was seen all over TV, it earned the most impressions during the Olympics (5.1% of its total for the quarter).

Peloton has now increased national TV ad spend for five straight quarters, and has a larger footprint on TV than any other DTC brand as well. The home fitness company was a big Olympics advertiser, though Peloton impressions were more focused on drama & action shows (30%) and sitcoms (16.5%).

With companies hiring once again, career moves are in the air — something Indeed is happy to assist with. The employment site dedicated about 35% of TV ad impressions to various news programs. With over 27% of impressions coming during daytime, Indeed is actively courting those pondering their next career step during work hours.

RINVOQ’s arthritis treatment prescription has become one of the most-seen pharma ads on TV. In Q3, the brand dedicated nearly 45% of impressions to the big four broadcast networks in an effort to get in front of the most eyeballs.

Emerging advertisers are only part of the Q3 TV story. Make sure to download the full report and learn all about the top TV ad trends, networks, brands and creatives from Q3.