Last week, GMC unveiled the first of three new ads as part of a new campaign designed to raise awareness of its low-profile truck brand, according to a March 2 article in Advertising Age.

General Motors announced the new campaign will be the broadest advertising campaign for GMC within the past 15 years with a renewed focus on digital marketing.

In a week, the spot titled “Precision Matters: Fastball,”which features San Francisco Giants relief pitcher Jeremy Affeldt, has seen 508national airings on 240 shows across 32 networks. At just under $6 million in estimated spend, the spot shares the same winning theme as Affeldt, who earned the Game 7 Word Series win for the Giants. Within the week, GMC climbed into iSpot.tv’s Digital Share of Voice Top Ten for automakers. Digital Share of Voice is a percentage of earned digital activity generated by an advertiser compared to all others in the industry. While Audi and Subaru typically dominate these criteria, GMC is just a few percentage points behind Chevrolet but leads in digital searches when compared to all other American automakers. 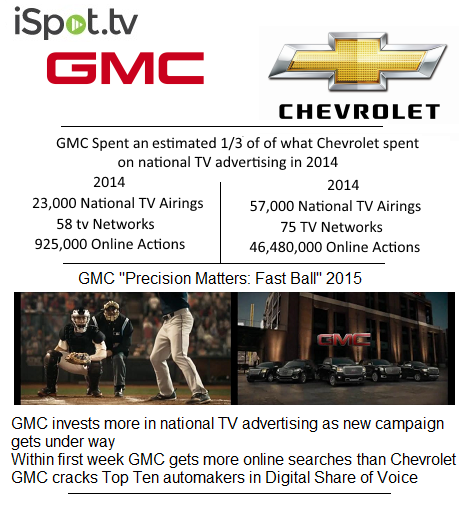 Up to the launch of GMC “Precision Matters: Fast Ball,” Chevrolet outspent GMC at a ratio of 5-to-1 since January 1, 2015. Within the first week of GMC’s new campaign, that ratio shrunk to 2-to-1. Chevrolet, however, has 13 different spots airing compared to GMC’s six actively airing ads. And, while Chevrolet is doing twice as well across most criteria this past week, GMC is outpacing Chevrolet in digital searches for GMC’s ads across iSpot.tv, Google, Bing and Yahoo. A clear sign that digital marketing efforts are beginning to pay off. In 2014 Chevrolet outpaced GMC 7-to-1 in digital online searches.

As sales continue to grow for GMC (11% growth in 2014), the Detroit automaker believes better marketing can draw more non-GM buyers. Early insights and performance metrics from iSpot.tv reveal GMC is moving in the right direction. For more please contact iSpot.tv.