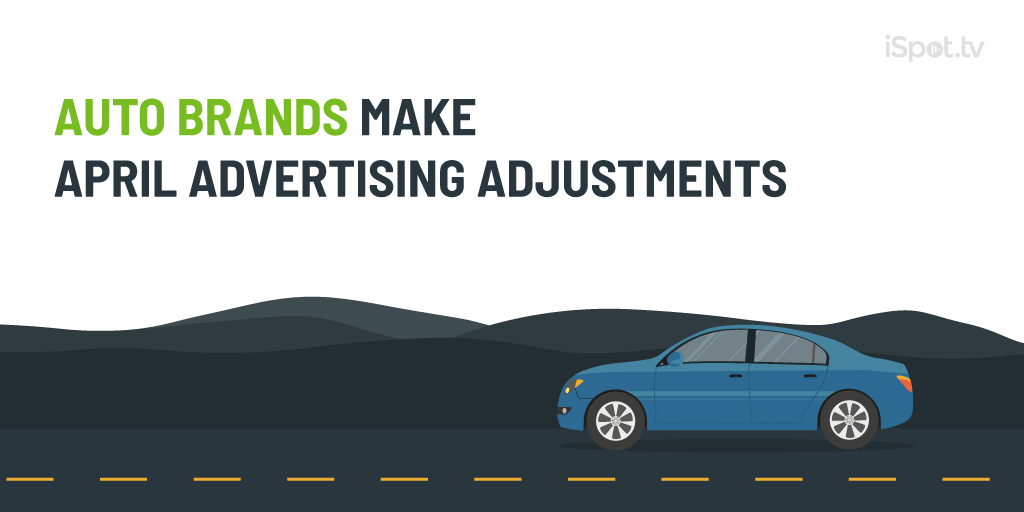 Without live sports on television, all advertisers have been forced to make major adjustments. Among those experiencing some of the biggest shifts is the auto industry, where April estimated TV ad spend was down over 70% year-over-year, and impressions dropped by more than 48% compared to April 2019.

Nearly 30% of automaker brand impressions in April 2019 came from sports-related programming — including the NCAA Men’s Basketball Tournament, NBA, NHL and golf (among other events). That number dropped to just over 6% in April 2020, and forced brands to find other show genres and dayparts to target the same audiences.

Utilizing iSpot data, we can see which automakers have adjusted to the “new normal” for advertising on television. This report identifies the top brands, new creative trends and programming variations as companies shift their thinking (and dollars).

April showed significant year-over-year spending declines for many top brands, and impressions followed. However, there were some notable exceptions like Hyundai (impressions up 26.7%), Lincoln (up 308%) and Fiat Chrysler (didn’t advertise as a parent brand in April 2019), which all found new opportunities to get ads seen on TV.

For Lincoln, the emphasis has been on remote sales. Its “Home” ad had almost one billion impressions in April alone. That was second among all automotive ads, only behind Fiat Chrysler’s “Drive Forward” (1.6 billion). Lincoln’s ad impressions have been heavy on morning shows, with about 35% dedicated to “Today,” “Good Morning America” and “CBS This Morning” in April.

Listed below are the top 10 automaker brands by April 2020 impressions (plus percentage change compared to April 2019).

Where Are Auto Brands Advertising Now?

Last April, nearly 10% of automaker impressions came from ESPN, and while the network still kept over 2% of impressions this year, that — plus additional sports-related shifts — left a significant number of impressions to head elsewhere.

Though national broadcast networks like NBC, CBS and ABC are still three of the top four networks by share of impressions, HGTV (from 2.8% to 5.7%), CNN (from 1.2% to 3.7%) and History Channel (from 2.9% to 4.2%) are some of several cable networks earning a larger share of auto ad reach than they had before.

One type of programming which offers a lot of viewers right now: reality TV. In April 2020, over 20% of automaker impressions came from reality television — nearly double the next-highest show genre (action/drama shows at 10.2%). Year-over-year, reality TV increased its share from 15.3% to 20.3%, and morning news also jumped significantly, from 3.3% to 8.4%.

With show shifts come daypart changes as well. While auto makers stuck with primetime, early morning doubled by percentage of linear TV ad impressions (from 5% to nearly 10%). Perhaps to little surprise, the three top April shows by auto ad impressions were all morning shows: “CBS This Morning,” “Good Morning America” and “Today.” None of those were among the top 25 by impressions last April (sports were dominant there).

Automakers are seasoned veterans around TV advertising, and many brands were quick to address the altered state of the U.S. (and world) in March; that messaging largely continued into April.

Many of the top automotive ads were centered around community, financing and dependability. Additionally, others expanded those themes out even further into charity angles and newer offerings like contactless car shopping to accommodate social distancing mandates. A select few kept running older, pre-COVID ads alongside those that specifically tailored messaging to the current crisis.

But which spots held the most audience attention? Utilizing iSpot’s Attention Score, you can see which ads had the highest percentage played through a TV device.