Holiday TV Ad Trends: How Are Brands Approaching the Season in 2021? 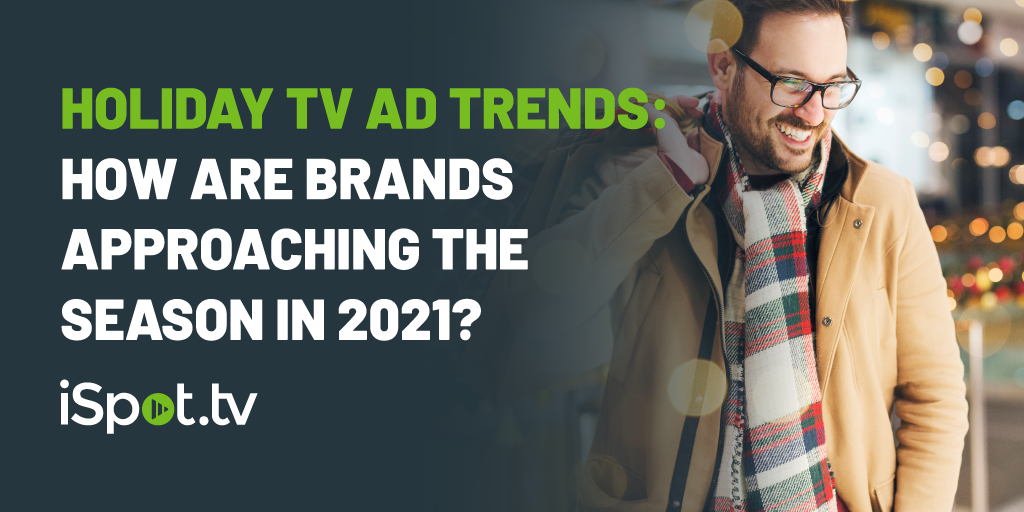 We are sharing insights behind the TV ad trends shaping the 2021 holiday season. Stay tuned for frequent updates and stories that will populate here. Interested in specific, holiday creative trends or TV ad performance for a particular brand or industry? Get in touch to learn more about how iSpot helps top brands assess creative effectiveness, enhance media plans and attribute TV advertising results.

Jump to one of the following sections:

McCormick Spices Up the Season(ing)

Historically, McCormick doesn’t spend a lot on TV ads, and when it does, the brand focuses on the time of year that people need spices most: the holidays and Thanksgiving. But the brand has really made a splash in 2021. McCormick has already surpassed its national TV ad spend for all of 2020 ($23.0 million to-date this year vs. $20.6 million through Dec. 31, 2020), and run rings around its 2019 efforts ($10.5 million for the full year).

This year, in particular, McCormick has been among the most-seen spots on TV for weeks. From Nov. 22 to present, “Holidays: Worth It” is No. 19 by TV ad impressions, with 15% of those delivered during the Hallmark Channel’s holiday programming. However, the individual shows with the most impressions for the brand are comedies and dramas in syndication.

Law & Order: Special Victims Unit served 3.9% of impressions for “Holidays: Worth It” since Nov. 22, followed by The King Of Queens (3.3%) and Everybody Loves Raymond (2.5%). On a related note, overnight was actually the top daypart for the McCormick spot, with 22.6% of all impressions (however, primetime was second with 17.4%).

The creative works for audiences regardless of daypart, though. Ace Metrix Creative Assessment survey data reveals the ad generated 8.4% more Attention than the norm for packaged foods in the last 90 days, and is 11.3% more Likeable. With a Brand Recognition score of 80%, it was also well above the packaged food norm of 70% in the timeframe.

Retail brands pounced on the “Turkey 5” (Thanksgiving through Cyber Monday) in 2021, with an estimated $131.5 million spent on national TV ads during the five-day stretch. That’s a 9% increase over last year during the same period, and a 19% jump compared to 2019 as retail continues efforts to make up for pandemic-related losses.

Walmart was the most-seen brand in the quest for holiday shoppers, with nearly 2 billion TV ad impressions. Meanwhile, Target had 1.37 billion and Macy’s had 1.06 billion while pushing Black Friday and Cyber Monday sales. Amazon’s new spot, “Choir Master Carl,” was also a hit with viewers after debuting on Thanksgiving.

Ace Metrix Creative Assessment survey data shows the spot garnered 12% more Attention than the retail norm over the last 30 days, and is almost 15% more Likeable, with 10% more Watchability than the norm as well.

The characters (Carl, but largely, dogs and a cat) were considered the Single Best Thing about the ad by 22% of survey respondents — more reinforcement of the fact that dogs are usually a hit when featured in video ad creative. On top of that, the spot landed humor in a favorable manner as viewers found the dog choir and grumpy cat funny.

Walmart has expanded its holiday ad scope beyond gift-giving this year as it went all-out in promoting both Black Friday deals and everything consumers needed for Thanksgiving. The brand has spent $56 million on holiday-related ads since Oct. 1 (most of any retail brand), and about a quarter of that came from Nov. 22-26.

Most-seen among the various spots was Black Friday-focused “Power XL Grill, Maserati Ride-On, Smart TV,” accounting for 4.5% of all retail TV ad impressions from Nov. 22-26. The spot resonated with consumers as well.

Ace Metrix Creative Assessment survey data reveals that the ad generated over 5% more Attention than the norm for holiday creative in the past 30 days, and was also 5% more Likeable. The deals advertised stood out as the Best Things about the spot, according to 21% of survey respondents. Brand Recognition for Walmart was at 87% — nearly 12% higher than the norm for holiday ads in the last 30 days.

For this particular Black Friday spot, Walmart favored the NFL, with 11.7% of TV ad impressions coming during NFL action from Nov. 22-26. In particular, the ad appeared five times during Thanksgiving’s games, just hours before in-store Black Friday sales began. Another focus? Hallmark’s Nine Kittens of Christmas, with 2.4% of all impressions during that same timeframe.

Peloton Rides Into the Holiday Season

Peloton has been blitzing TVs in the lead-up to Thanksgiving and Cyber Monday, with over 5.8 billion ad impressions since October 1 (and over $50 million spent on national TV spots). While cable has been a major focus for the fitness brand, it’s also put an emphasis on major sporting events on Fox — with 5.5% of impressions coming on the network, and all of those derived from football- and baseball-related programming.

Compared to all of Q4 2020, Peloton has already spent over $30 million more on national TV ads in Q4 2021, and still has over a month left to go. Peloton is among the top-20 brands by TV ad spend since October 1, and is the 11th most-seen brand in that same timeframe.

But Peloton isn’t just maximizing its TV appearances. The brand’s ad creatives are also finding success with audiences. Ace Metrix Creative Assessment shows that new spots like “When Your Workout Is a Joy, It’s a Joy to Work Out: $59/Month” and “Thanksgiving: FOX Football Feast” are performing above the norm for fitness brands over the last 90 days.

The $350 off version of “When Your Workout is a Joy” garnered 5% more Attention than the norm for fitness brands, while “FOX Football Feast” (featuring Reggie Bush and Charissa Thompson) was nearly 6% more Likeable. Both spots saw Brand Recognition of 78% from survey respondents — well above the 70% norm for fitness brands.

DTC apparel brand, Bombas, has been increasing its TV presence in Q4 so far in hopes of finding holiday shoppers also looking to give back (since the brand donates an item for every one sold). Nearly 70% of Bombas’ estimated national TV ad spend in the second half of 2021 has come in Q4, with spend rising gradually in recent weeks.

The brand’s most effective ad in the last 30 days (and one of the most effective ads on TV in that stretch), according to Ace Metrix Creative Assessment, has been “Most Requested Items,” which explicitly calls attention to the brand’s value proposition as one that gives back.

The spot garnered 13.4% more attention than the norm for retail-category ads, and was 13.7% more likable according to Ace Metrix analytics. The message was the Single Best Thing about the ad, according to 25% of survey respondents — a sign that leaning into philanthropy during a time of year when people are more willing to donate was the right call for Bombas this holiday season.

Its signature collection of holiday movies makes Hallmark a seasonal staple for TV audiences — and advertisers eager to reach them. Since November 1, Retail brands make up nearly 20% of all TV ad impressions on Hallmark and Hallmark Movies & Mysteries, up from about 17% during the same period in 2020.

Of the 10 most-seen brand advertisers on the two networks, eight are pushing holiday sales messaging. Christmas tree brand Balsam Hill is putting an emphasis on Hallmark programming, too. Nearly 50% of its impressions this month are on Hallmark and Hallmark Movies & Mysteries as it looks to catch audiences in the holiday spirit.

Balsam Hill is one of many brands to put winning ads in front of potential holiday shoppers this year. Among the most-seen creatives on Hallmark and Hallmark Movies & Mysteries this month is the new holiday spot from L.L. Bean, “A Man and His Dog.”

According to Ace Metrix Creative Assessment data, the ad generated 21% more Attention than the Retail norm over the last 90 days, and is 26% more Likeable than the norm as well. This breakthrough success contributed to the ad’s effectiveness. So far this season, it’s the highest scoring holiday-themed creative overall (across industries). The spot accomplished this with a relatable narrative that evoked “heartfelt” and “nostalgic” feelings among gen pop viewers. According to 21% of those surveyed, the characters (the man and his dog, as you might guess) were the Single Best Thing about the ad.

Also, 78% of respondents accurately identified L.L. Bean as the advertiser in “A Man and His Dog” — about 5% more than the norm for Retail brands in the last 90 days. As one survey-taker noted, “Christmas. A dog. How can you go wrong?”