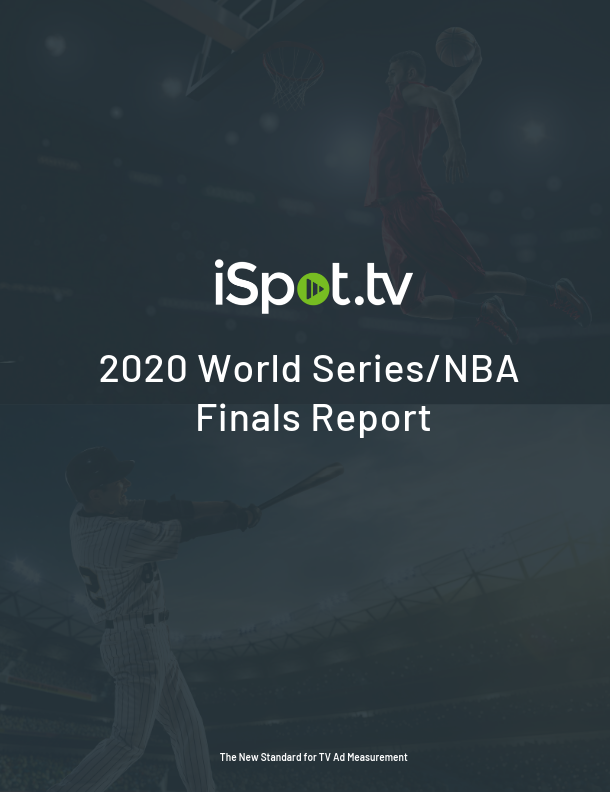 With all four major U.S. professional sports leagues in action this September, it was a sports fan’s dream. And that dream extended out to the leagues, networks and advertisers too, as live televised games provided a return to normalcy.

Sports’ big return to TV culminated in the 2020 NBA Finals and World Series airing within a week or so of one another, providing all parties involved with the sort of big event that has been rare since schedules were turned upside down by COVID-19 back in March. As expected, brands used the Finals and World Series as opportunities to make their own big returns to television, or at least evolve creative.

During the NBA Finals, which ran from September 30 through October 11, fans were most likely to see ads from quick serve, automaker and beer brands, with all ads amounting to about 5.2 billion impressions. Google, in particular, made a big splash during the games. Along with YouTube TV sponsoring the Finals and getting logo placement at centercourt, YouTube TV and Google combined for over 300 million impressions during the six games series. The brands also accounted for two of the four most-seen NBA Finals ads.

World Series advertisers had some overlap with the NBA — there were still plenty of automaker and quick serve spots — but there was an additional industry focus on professional services. Brands in enterprise and cloud, software and apps, and job search industries were all among the top 10 by impressions. For job search site Indeed, MLB games have actually generated four times more ad impressions than any other show since the start of October.

As has been the case on TV overall in 2020, streaming was also a major factor in advertising during both the Finals and World Series. These services combined for more than 600 million subscribers across the dueling six-game series, led by YouTube TV, Apple TV+, Disney+ and Amazon Fire TV.

Interested in learning more about this year’s World Series and NBA Finals on TV, and how brands advertised during these major sporting events? Check out iSpot’s newest report.