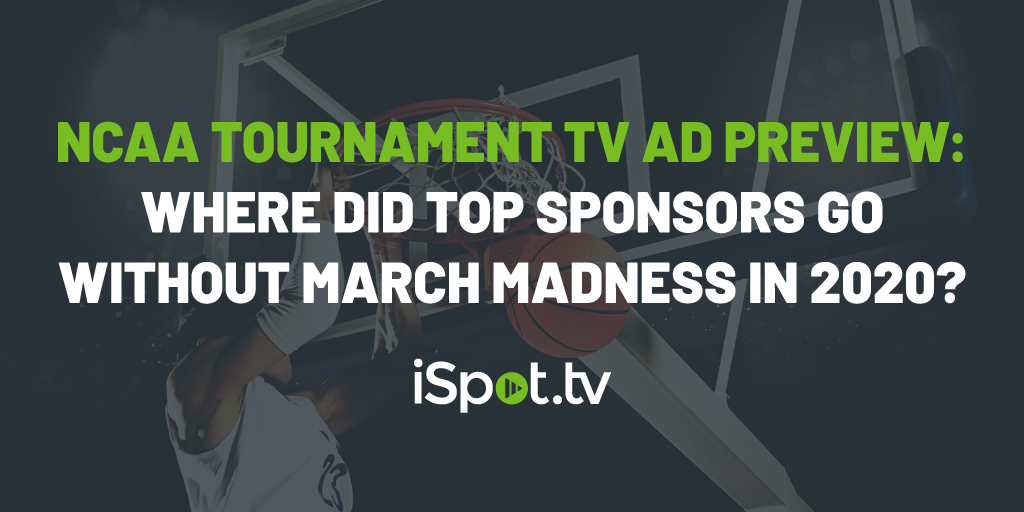 While many live sporting events were postponed in 2020, the NCAA men’s and women’s basketball tournaments were among the only ones to be completely cancelled. The billion-dollar loss was not only felt by the teams set to play in the event — but the networks and brand advertisers, too.

Thankfully, for everyone involved, both the men’s and women’s tournaments return to TV this year. And after a year off, the expectation is that fans will be anxious to get back to watching the action. Top sponsors are looking forward to its return as well, after spending last March pivoting to other shows. So where did they go? A look at some of the top sponsors and how they changed plans in March 2020.

Last year, when live sports went off the air, data from iSpot allowed brands to find those audiences watching news shows and networks, and during new dayparts on TV. Throughout last year’s programming shifts, iSpot provided insights that helped brands migrate with the audiences they were looking to target.

Beyond premium live sports inventory, AT&T finds TV ad impressions during numerous syndicated shows at all times of day. Last March, the brand didn’t opt to follow audiences to new shows as much as it kept investing in shows where it already appeared. Those well-watched syndicated programs included the likes of Ridiculousness (5.9%), the Big Bang Theory (3.4%) and the Office (3.3%). While primetime impressions didn’t decline considerably (from 37.9% to 35.3%), the percentage of TV ad impressions during daytime day parts nearly doubled.

No NCAA Tournaments meant a very scaled-back TV presence for Coca-Cola during March 2020. Ad impressions were down more than 75% year-over-year. When Coca-Cola did appear, it was during syndicated programming (Ridiculousness, the Office) or the Masked Singer, one of the network primetime shows left standing in the immediate aftermath of pandemic lockdowns. For Coca-Cola, drama & action and reality shows made up over 40% of TV ad impressions last March vs. about 21% in March 2019.

Some of those same brands are already off and running with TV ads for March Madness in 2021, too.

According to Ace Metrix Creative Assessment, the spot’s attention is 8% above the credit card category norm, with likeability nearly 11% above. Audiences found the ad to be “funny” most of all, and 59% of survey respondents agreed that the Characters were the Single Best Thing about “Bird Watching”.

Buick’s “Quadruple Take: March Madness” showcases the Envision and how it addresses the varied sensibilities of a single car buyer.

Attention for the ad was 4% higher than the luxury automotive category norm, with likeability scoring 6% above the norm. The product itself was the Single Best Thing about the spot, according to 36% of survey respondents.

For Wendy’s initial March Madness ad, commentator (and former player) Reggie Miller moves back into the Wendy’s restaurant in a revival of past years’ ad creative concepts.

This time around, the restaurant is more of a “bubble” in keeping with current events, though his main motivation is really the brand’s breakfast menu. According to Ace Metrix Creative Assessment, the ad scored around NCAA advertising norms on Likeability and Attention metrics, and “funny” was the strongest emotional response among viewers.

As more ads roll out during the first two rounds of both the men’s and women’s NCAA Tournaments, we’ll be shining a spotlight on some of the top performers. Stay tuned for our opening weekend NCAA Tournament report next week, and reach out today for a demo on how you can utilize iSpot to test video ad creative effectiveness and track sports audiences on TV.