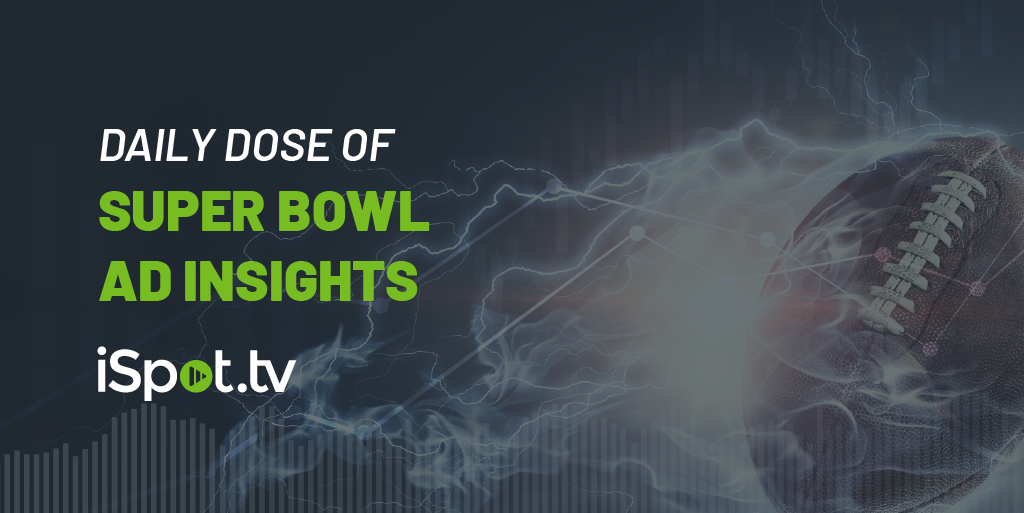 In the lead-up to the big game this year, we are capturing insights around the brands and ads set to appear on TV. Stay tuned for our daily snippets and stories that will populate here. And for more, you can check out the latest data on our Super Bowl VIP Ad Center, and tune into our post-Super Bowl webinar hosted by Ad Age.

Just in case audiences forgot, Frito-Lay wants to make sure they remember the chips for the Super Bowl. This year’s spot, “Twas the Night Before the Super Bowl,” unleashes a bevy of NFL Hall-of-Famers (and soon-to-be honorees) narrated by Marshawn Lynch to showcase Frito-Lays products.

Amazon’s Alexa has been part of the last six Super Bowls, and in a twist this year, she’s portrayed by actor Michael B. Jordan.

With many Super Bowl stalwarts sitting out of the game this year, and various brands finding newfound success during last year’s stay-at-home environment, it’s opened up room for new advertisers to appear at a greater rate than they did last year.

For the first time in 37 years, Budweiser is passing on Super Bowl airtime. Instead, the brand announced in “Bigger Picture” that it is redirecting the money it would’ve spent on a game day spot towards raising awareness for COVID-19 vaccines.

What do people like best about Super Bowl ads?

View more on past Super Bowl spots and top brands

After a decade that’s seen Pepsi produce nearly a dozen Super Bowl ads, PepsiCo has announced that it will bench its flagship brand for Super Bowl LV.  But Pepsi is still storming the big event as title sponsor of the halftime show starring The Weeknd, who appears in what is to-date the most buzzed-about TV ad among the pre-release pack in the iSpot Super Bowl Ad Center so far.

Most Empowering Super Bowl Ads Since 2014

Brands can take a variety of approaches to the Super Bowl with the goal of producing memorable creative. In recent years, “empowering” ads have been on the rise during the big game — a trend that is likely to continue in 2021 given how the tone of spots shifted throughout last year. These ads typically focus on brand building through purpose-driven messages that resonate with consumers’ shared values.

While Budweiser is sitting out the Super Bowl this year, other ABInBev brands will still be advertising during the game. Michelob Ultra is one of those, with its spot featuring numerous sports stars being happy, emphasizing that “it’s only worth it if you enjoy it.”

Can a Burrito Change the World? People Think It’s Healthy and Like That Message At Least

Rather than focus on its product — a known commodity without any new features — Chipotle instead leans into sustainability and corporate responsibility with its 2021 Super Bowl creative. The spot features a young boy talking about how Chipotle’s process of making burritos can teach us about various ways to conserve energy and natural resources, putting a spotlight on farmers over the brand.

After a year in which DoorDash increased TV ad impressions by more than 79%, the brand had less of a need to explain its service to audiences with this year’s Super Bowl spot. Instead, the teaser used Cookie Monster and actor Daveed Diggs to tell viewers — conveniently, during an event when many will get food delivered — that for a limited time, $1 from each delivery will be donated to Sesame Workshop.

Following a decade of taking user submissions for Super Bowl ads, Doritos opted for celebrity-laden affairs in recent years and generated some of the game’s most memorable ads. This year, the stars are Mindy Kaling and Jimmy Kimmel, along with an off-screen (in both teasers) Matthew McConaughey. The ad is also prepping viewers to engage with the hashtag #flatmatthew in advance of the game, to increase conversation around the ad.

Learn more about all of this year’s Super Bowl advertisers and past year’s creative at iSpot’s VIP Ad Center.