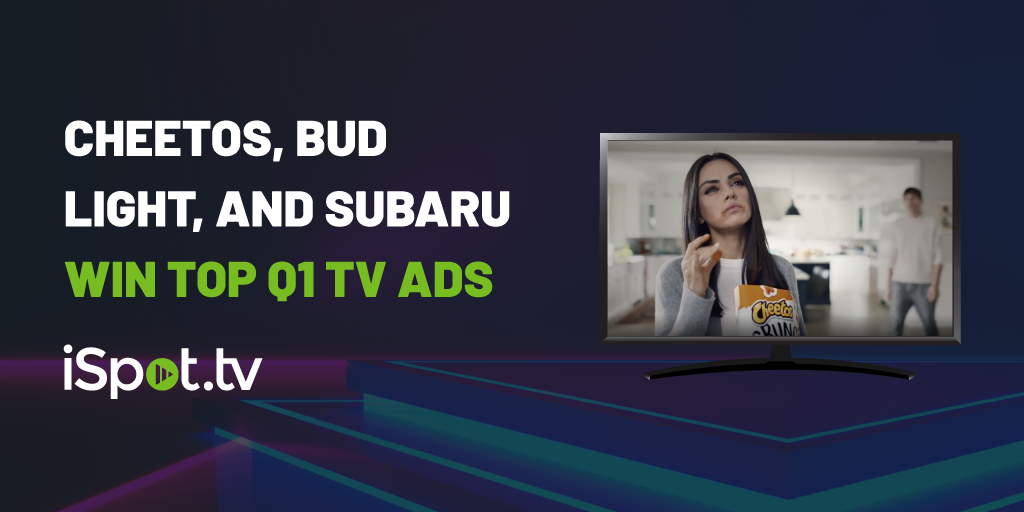 Video creatives from the first quarter always raise the advertising bar for the months that follow. Besides starting off the new year with their best foot forward, the abundance of TV tentpoles in Q1 (Super Bowl, awards shows, March Madness, etc) gives advertisers all the more reason to show off their best work.

Of the 2,200+ video ads tested in Q1, the following three distinguished themselves by achieving the highest scores on Breakthrough, Funny or Empower metrics from Ace Metrix Creative Assessment.

The “someone-stole-my-Cheetos” idea in “It Wasn’t Me” tapped into a previously successful ground truth for the Cheetos brand (see: Q3 2020’s funniest ads and 2016’s funniest ad), but with a unique, pop culture spin that won viewers over. The Super Bowl creative scored 26% higher on Breakthrough than the all-industry average last quarter. Contributing to its strong performance were likable celebrity characters (32% of viewers chose as Single Best Thing about the ad) and Nostalgic music — both of which were successfully woven into a storyline that drove an impressive signal on Funny.

With nearly 732 million TV ad impressions since its Super Bowl debut, “It Wasn’t Me” was the second-most seen Cheetos spot of the first quarter. It was also top-15 in terms of impressions among all snack food ads on TV during Q1.

Note: Cheetos “It Wasn’t Me” ranked 2nd on Funny in Q1 (right after the ad below).

Q1’s funniest ad withstood the test of time since it’s original air date in 2003. Bud Light’s “ Legends: Picnic” resurfaced a classic from the brand’s ad creative vault. Last quarter, the 2021 version, starring Cedric the Entertainer, was the highest scoring ad on Funny, which measures the strength of humor.

Like the Cheetos ad, celebrity star power combined with universal humor led to a strong Breakthrough performance. The spot scored 11% higher on Attention and 7% higher on Likeability than all other ads in Q1. A sample of viewer verbatim comments about the creative reveals how impactful the humor was in captivating audiences in a likable manner:

“I thought Cedric the Entertainer was funny in the ad. It really caught my attention and made me laugh.” Female 36-49

“One of the funniest commercials ever! Really got my attention and made me laugh. Even though I don’t care for Bud Light I loved the commercial.” Male 21-35

“It was funny, it caught my attention and made me wanna watch it.” Female 21-35

“Love it! Great characters. Very humorous. Could watch this ad over and over again.” Female 50+

“The video overall was very amusing and funny. Really caught my attention.” Male 21-35

“I loved it! Laughed my ass off. Cedric the entertainer, my guy. He is so funny! Best choice Bud Light could have made there.” Male 36-49

Purpose came naturally to brands during the pandemic and the universal impact of COVID-19 meant most (if not all) viewers could connect with advertisers’ messages. While Subaru “Love Promise: Feeding America” acknowledges the pandemic like many ads before it, the brand has promoted philanthropic messaging long before March 2020 making it practically synonymous with purpose  (see: Q3 2019’s Most Empowering Ads). In fact, 55% of Subaru ads from the last five years have scored on Empower, which measures the positive cultural impact of advertising and indicates when viewers find an ad’s message encouraging, motivating or inspiring.

“Love Promise: Feeding America” had a strong Breakthrough performance, like the Cheetos and Bud Light ads. However, Information was the key creative driver with a score 23% above the Q1 average for automotive ads. Even with all the emphasis on “Feeding America”,  90% of viewers still recognized Subaru as the advertiser after watching — achieving a high brand recognition that significantly outperformed the Q1 automotive average of 75%.

The Subaru spot accounted for 1.34 billion TV ad impressions in Q1 2021. It was the most-seen Subaru ad of the quarter by more than 53%, despite not appearing until late January. “Love Promise: Feeding America” was also the eighth-most seen automaker spot of the quarter.

Do you know which Q1 ads stood out most in your industry? Get in touch to see how your video creative stacks up against the competition.