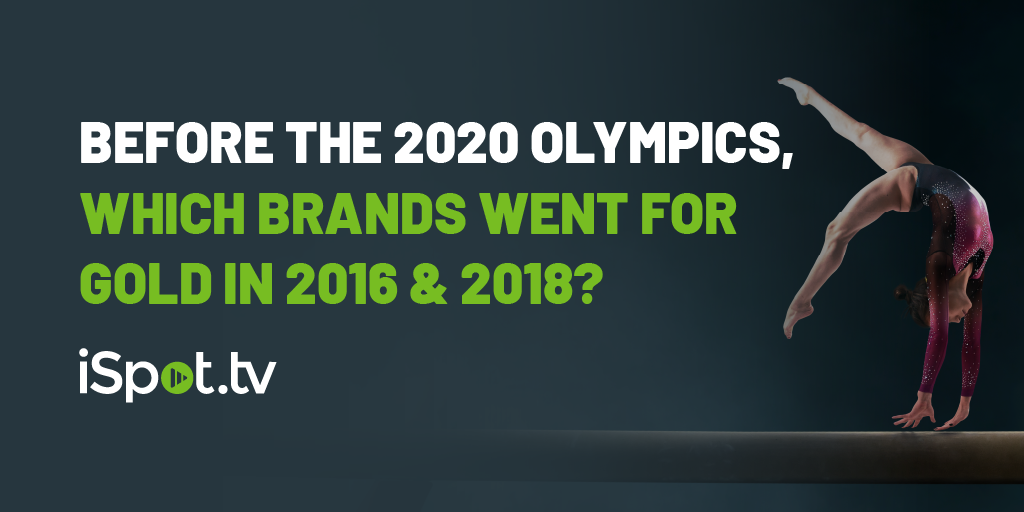 After a year-long delay, the Tokyo Olympic Games are finally here. Along with athletes and fans around the world, brands have also been anxiously awaiting the postponed 2020 Olympics to debut new TV ad creative.

So far in 2021, sponsors like Toyota, Trulicity, Verzenio, Visa, New Balance and more have already advertised around the Games. And there’s plenty more to come once the opening ceremony begins. While we expect this year’s Olympic Games to have a different look and feel from previous years, analyzing TV ads from 2016 (Rio) and 2018 (PyeongChang) can still foreshadow what to expect this time around in Tokyo.

During the 2016 and 2018 Olympics, automakers were the biggest sponsors from an industry perspective. Auto brands accounted for 16.8% of national TV ad spend in 2016 and 18.5% in 2018 — and in both cases, that number was twice that of the next-highest industry.

When it comes to the feel of Olympic-themed ads, key themes emerge. Inspirational, heartfelt storytelling has been the norm as brands capitalize on the emotions surrounding the games and the athletes themselves. In 2016 and 2018, 64% and 53% of respective Olympic-themed ads scored on the Inspiring metric from Ace Metrix Creative Assessment. With all the trials and tribulations in 2020, this year’s Olympics is sure to be packed with inspirational TV ad messages.

The most inspiring Olympics ads from the 2016 and 2018 games came from Dick’s Sporting Goods, Procter & Gamble, and Comcast. “The Contenders” from Dick’s Sporting Goods was the most inspiring from the 2016 Rio Olympics, followed by “Thank You, Mom – Strong” from Procter & Gamble. According to Ace Metrix Creative Assessment, both ads excelled in overall effectiveness and demonstrated a really strong Breakthrough, with high scores on Attention and Likeability.

In 2018, Comcast won the gold medal in “inspirational Olympics TV advertising” with “Represent the Flag.” It ranked as one of the top Breakthrough spots from the 2018 Olympics, garnering high scores on Attention and Likeability. Rico Roman’s inspiring story and the ad’s uplifting message successfully resonated with gen pop viewers.