Key Insights on the Top NFL Playoff Creatives So Far 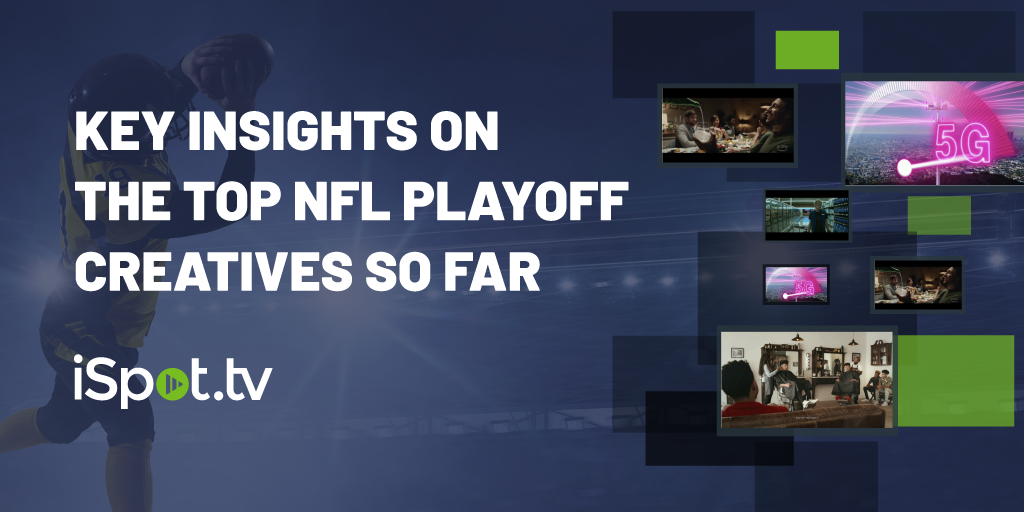 Through two weeks of the NFL Playoffs, live games have generated 20.5 billion TV ad impressions for brands, against an estimated spend of $858.7 million. Using data from iSpot.tv and Ace Metrix Creative Assessment below, we look at the top brand spots from the first two rounds of the playoffs:

1. H&R Block: With or Without the Office Visit (473.2 million impressions)

Tax season approaches quickly, and H&R Block looked to get ahead of things by launching its evolved creative with an emphasis on remote consultations and dropoffs. The ad first appeared on TV on Dec. 21, generating nearly 2.04 billion ad impressions in that timeframe. Almost 25.4% of impressions have come during NFL games, with college football, SportsCenter and NBA games making up the rest of the top four shows for the ad. In a typical year, H&R Block runs ads from late December through mid-April, though 2020 featured additional appearances in July taking into account the late tax filing date.

Audiences found “With or Without the Office Visit” to be clear and concise, with the Single Best Thing about the spot being the message (according to 23% of respondents to Ace Metrix Creative Assessment Survey). H&R Block branding was recognized by 86% of viewers.

State Farm’s “Barbershop” is the continuation of the insurance brand’s work with Kansas City Chiefs’ QB Patrick Mahomes and its “Jake from State Farm” character. The pair were the Single Best Thing about the ad (said 29% of survey respondents). As for Brand Recognition, 91% accurately identified “State Farm”. Audiences found the ad to be funny, more than any other emotion.

“Barbershop” is one of the more recent State Farm ads to hit TVs, first appearing on Nov. 23, 2020. Since the start of football season, it’s the seventh-most seen State Farm ad, with nearly 1.02 million impressions.

Instead of a traditional Super Bowl spot, Pepsi is just doing the halftime show this year — but that doesn’t preclude them from airing ads to tease out the performance. Pepsi’s new “Get Ready” spot has appeared almost entirely during NFL-related programming (over 85% of TV ad impressions have come during NFL games or shows about the NFL) since its first appearance on Jan. 9.

The music, from halftime show artist the Weeknd, was the Single Best Thing about the ad according to 28% of viewers. In a similar vein, the audio — the Weeknd single “Blinding Lights” — elicited the biggest emotional response. Pepsi had 64% Brand Recognition, with viewers also recognizing it was a Super Bowl Halftime Show spot.

After nearly a year off the air, Amazon Prime’s “It Wasn’t Me” returned to TV and is one of the 25 most-watched spots on TV since the start of the year. It’s currently the only ad airing for Amazon Prime, and has generated about 685 million impressions since Jan. 1 (with almost half of those coming during NFL games).

Convenience was the prevailing emotion from the spot, with the visual scenes driving this response (it utilized a unique freeze-frame presentation of different dinner products customers can have delivered via Prime). Amazon had brand recognition from 61% of viewers, versus 65% for Prime.

In its spot showcasing the 2021 Silverado Trail Boss, Chevrolet leaned into more cinematic elements — something audiences caught onto. About 35% of those surveyed felt the visual scenes were the Single Best Thing about the ad (the product itself got 23% of the vote there). Brand Recognition was strong as 85% of viewers identified Chevrolet or Chevy, and some even mentioned the model  Silverado (19%), Trail (7%) and Boss (7%) in their responses.

Chevy first introduced the ad on Jan. 1, and has leaned pretty heavily on football since. NFL games made up 53.6% of TV ad impressions for “Last Thing,” with another 14.6% during college football (plus another 4.9% during the College Football Playoff National Championship and 2.7% during ESPN’s DataCenter presentation of the game).

T-Mobile’s been airing several forms of its “5G Network Anthem” spots since last year, with messaging around its new 5G capabilities. This latest iteration is an updated version of existing creative, just to reflect January timing for increased speeds. The biggest emotional reaction came from how colorful the spot was (with T-Mobile’s signature hot pink taking over the map). Those visual scenes appeared to be the Single Best Thing about the ad by 23% of survey respondents. Additionally, 88% of respondents identified the T-Mobile brand, with 7% recognizing 5G and 7% for Sprint (merged with T-Mobile) as well.

T-Mobile increased its presence during NFL action quite a bit during the 2020-21 season. TV ad impressions for the wireless carrier were up 21.2% during NFL games, compared to the previous season.

Along with the Silverado-focused spot, Chevy is also airing a more complete brand-centric spot during NFL playoff games. “Just Better” has been utilized pretty heavily during NFL games since first appearing in September (18.1% of TV ad impressions have come from NFL games), followed by MLB games (3.1%). “Just Better” is also the most-seen Chevrolet ad since the start of football season, with 18.0% of all impressions for the brand.

The cinematic aspects of this spot were noteworthy for audiences, along with the green messaging about Chevy’s electric vehicles. Visual scenes were the Single Best Thing about the ad according to 30% of viewers, and 85% of audiences recognized the Chevrolet brand.

Along with spots featuring the Chiefs’ Patrick Mahomes, State Farm has also been pairing its Jake character with Green Bay Packers’ QB Aaron Rodgers. In “Rodgers Rate,” 30% of respondents chose the characters (Aaron and Jake) as the Single Best Thing about the ad. Audiences connected with the humor and 86% recognized State Farm as the brand.

Nearly every TV ad impression for “Rodgers Rate” has come from NFL games (89.3% of impressions) or NFL-related programming. It was the fourth-most seen State Farm spot on television since the start of the football season.

As one of TV’s top advertisers each year, GEICO’s appearance among the NFL’s most-seen spots should come as no surprise. The insurance brand was the third-most seen NFL advertiser during the 2020-21 regular season, and has been No. 7 in the playoffs so far. “Tag Team Helps With Dessert” has been GEICO’s top ad in the new year, with nearly 22% of all of the brand’s impressions. NFL games have made up about a quarter of those.

The spot is a memorable one for audiences, who also resonated with  its funny and quirky tone. The ad’s characters were the Single Best Thing about the ad, according to 21% of viewers (music was a close second at 20%). Also, 89% of viewers recognized it was an ad for GEICO.

The characters — largely pulled from popular movies — were the Single Best Thing according to 32% of viewers. For Brand Recognition, 64% of respondents identified Discover, and another 23% specifically mentioned Discover Card.